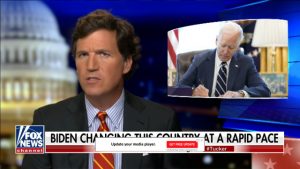 Fox News host Tucker Carlson put the Biden administration on blast during his program on Thursday evening after he found out the president used the U.S. military and the Pentagon to attack his show.

“So we’ve got new hairstyles and maternity flight suits. Pregnant women are going to fight our wars. It’s a mockery of the US military,” Carlson stated. “While China’s military becomes more masculine … our military needs to become, as Joe Biden says, more feminine. It’s out of control and the Pentagon’s going along with this. Again, this is a mockery of the US military and its core mission, which is winning wars.”

The Biden administration responded by publishing an attack on the Fox News host that was posted on the Department of Defense’s official website.

“Press Secretary Smites Fox Host That Dissed Diversity in US Military,” the headline of the piece stated, which stated that Carlson was perhaps attempting to compensate for something because he might “feel like” he has “something to prove.”

Carlson issued a blistering response to the Biden administration’s attack, stating, “Finding the most effective military pilots or infantry officers or SEAL teams is not [Biden’s] priority.”

“It’s not even close to his priority. Identity politics is Joe Biden’s priority,” Carlson continued. “It’s all that matters.”

We now have a president who has used the military as a political weapon against those who dare to criticize his insane plans concerning transgendered folks in the armed forces.

This, folks, is an abuse of power. It may not be legally listed as such, but it’s definitely not ethical to do something like this. But what do you expect from Biden, right? This is totally in the guy’s wheelhouse.