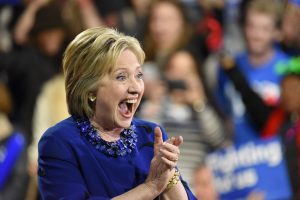 More and more pundits are starting to bat around the idea that Hillary Clinton may actually take a last-minute dive into the 2020 Democratic presidential race, and boy do we hope they’re right.

On an episode of “Tucker Carlson Tonight” earlier this week, Fox News’ Tucker Carlson argued that Clinton’s recent actions seem to indicate a desire to exhume her career in politics:

“Why are we ignoring the obvious?” Carlson said in the segment with guest Robert Patillo, a Democrat strategist. “Of course she’s getting in.”

“What we have seen is the Democratic Party has been looking for that standard-bearer,” Patillo said. “You have 70 percent of the party that is looking for something different. They are hoping it will be Biden but as his campaign continues to get hit over Hunter Biden, continues to get hit over Ukraine, all these other scandals, that opens the door for somebody like Hillary Clinton who has 100 percent name recognition.”

Because Clinton doesn’t have her own unsettled scandals? Okay, buddy.

As Carlson states, Clinton sure is awfully vocal about the current Democratic party offerings for someone who prefers to be on the sidelines.

“Hillary Clinton weighs in out of nowhere the other day and attacks Tulsi Gabbard, calls her a Russian spy,” Carlson said. “My theory, and I think it’s true — and someone who worked for the Clintons for years confirmed it for me today — the Clintons don’t do anything haphazardly, accidentally, everything is strategy… I think she’s absolutely going to get in the race.”

While the current roster of 2020 Dems certainly isn’t lacking in quantity, a fair amount of my job security as a political writer has come from the fact that they are stunningly bereft of quality, even by Democrat standards.

As The New York Times noted in a recent report, sometimes-frontrunner Joe Biden is beginning to run into some fundraising trouble, while Sen. Elizabeth Warren, Sen. Bernie Sanders, and Pete Buttigieg are all becoming increasingly inviable candidates. And let’s not even get into Beto, Harris, and the other candidates whose brains don’t appear to be firing on all cylinders.

An early October Rasmussen poll, however, showed that Clinton, if she did take a whack at the Pennsylvania Avenue piñata again, would have some pretty serious cliffs to scale.

“The latest Rasmussen Reports national telephone and online survey finds that Clinton and Trump earn 45% support each among Likely U.S. Voters. The deciding 11% remains undecided,” Rasmussen reported. “But just 18% think Clinton should enter the race for next year’s Democratic presidential nomination. Seventy-one percent (71%) don’t think she should run. Twelve percent (12%) are not sure.”

With numbers like that, let’s hope and pray Mrs. Clinton goes for it! Easy re-election!