Trying to Evade Deportation? There’s An App for That 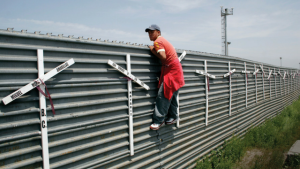 There is an app for everything these days, from finding a date to ordering food to doing your taxes to taking silly pictures of yourself with bunny ears and little sparkly things around your eyes just because!

Even illegal immigrants can find something for them, like the new app “Notifica” Google and Apple have featured in their app stores. Notifica gives “you and your family a help button to alert key contacts if anyone is at risk of deportation.”

“Simply create your messages today and you will be ready to press a button for help when you or your family needs it. Alerts are designed to inform family members, legal advocates, and other contacts that the sender may have been detained by the police or Immigration and Customs Enforcement (ICE).”

So it’s like Uber, except instead of alerting you when your ride has arrived, it alerts you when to run and hide! So cool.

The app is so very handy for illegal immigrants, it was rated #1 on a list of CNN’s Must-Have Apps for Undocumented Immigrants–and yes, that’s actually a list that CNN compiled!

“President Trump’s efforts to crack down on immigration have left millions of undocumented immigrants with an uncertain future in America,” the author of the handy app list for illegal aliens writes. “In response, digital entrepreneurs are using technology to help support this community.”

“Notifica is an app that gives people control of their own destiny,” founder Adrian Reyna told CNN. “I want to do everything in my power to make sure that individuals aren’t afraid and they are able to live a life with dignity and respect that they deserve.”

Isn’t it funny how leftists constantly decry capitalism and yet seem to love the fruits of the free market?

“There is a widespread, resounding, deafening silence in the tech community for the undocumented immigrants, and we’re just trying to fill that void,” says William McLaughlin, founder of the #2 app on CNN’s list, “Arrived”, which helps illegal immigrants with the latest immigration news, English lessons, and information on the deportation process.

While apps are easy to download, it certainly seems like for the immigrant concerned about ICE raids and deportation, respecting the immigration laws of the country in which you would like to someday live might be even easier, but that’s just me!

But I get it, who has time for laws in this fast-paced technological world? Head on over to iTunes or Google Play to download your app today!