The Truth Really Is Stranger Than Fiction 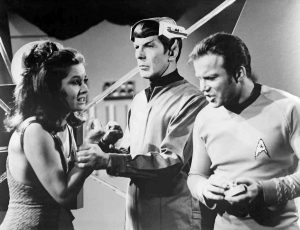 The world shifted beneath my feet on June 6, 1982. That was the day Star Trek II: The Wrath of Kahn was released. I was at the Plitt Theater, midway down the center section, for the 7:00 pm showing, and I left in what can best be described as numb rage. Mr. Spock was dead. That meant Star Trek was dead. And we had just gotten it back!

Somehow, that horrible night was thirty-five years ago, and to celebrate the anniversary, it was on the big screen for one showing this weekend. I was there, near the front, this time with my wife instead of high school buddies. Since she’s a lifelong Trekkie, as well, my handkerchief was no longer clean by the time we gathered our trash and left the theater.

Star Wars was a good movie, and three of the six follow ups so far have been good. The middle three… Or was it the first three? Whichever, the ones with the really bad version of young Darth Vader in them weren’t very good, I thought. Still, the franchise is fun. The thing is, it’s always going to be fiction. The whole thing starts with the phrase, “A long time ago in a galaxy far, far away…” So, it’s got nowhere to go.

Star Trek, however, has always focused on the future and the possibilities it holds. When the starship Enterprise took its first voyage across America’s television screens fifty-one years ago, everything about the show was science fiction. Everybody knew people couldn’t live in space, and spaceships had to be launched on rocket boosters and splash down in the ocean. Communicating with a computer required a series of punch cards, and the closest thing to a communicator anyone had ever seen was a walkie talkie. Phasers were the realm of Isaac Asimov and Ray Bradbury, and teleportation was beyond even their groundbreaking stories.

Today, I had to silence my cell phone (communicator) before the movie started. The commander of the International Space Station was a year behind me and one company over in college. The U.S. Navy can use a laser beam as a weapon. If I want to know something about anything, I just ask Alexa, and she answers me.

Other technology is under development. Chinese scientists teleported a photon earlier this year 310 miles to a satellite orbiting the earth. NASA has made great strides toward an ionic impulse engine to move spacecraft quickly and efficiently between planets. While these programs are years, or even decades, away from being used, the technologies are real, and that means Star Trek has become fiction instead of science fiction.

A lot of things have changed since my friends and I sat in that theater thirty-five years ago. Unlike those things predicted by the Star Trek franchise, some of them defy reason or explanation. In 1982, for instance, Corporal Klinger was still trying to get a Section 8 discharge from the Army by dressing as a woman. Today, it would be the people questioning his choices who found themselves back in the civilian world.

A student who caused trouble in class in 1982 paid the price. Today, it’s the teacher who suffers the consequences for the student’s actions. Kids were expected to dress, not so much with decorum back then, but at least well enough to cover themselves. The music didn’t always sit well with parents, but never did it glorify violence against women or cops, and never did it promote racism.

If somebody said something hurtful back then, we duked it out in the parking lot behind the school and got on with life. Handling an insult or some perceived slight at work meant going to the person and talking it out or just sucking it up. The closest things we had to safe spaces were the old fallout shelters. People generally got over themselves without going to court, blocking highways, or getting someone either fired or kicked out of school.

Nobody questioned the difference between boys and girls thirty-five years ago, and a boy caught in the girls’ bathroom was going to be in a world of hurt. Getting busted in the girls’ locker room or shower would have meant jail time or, quite possibly, hospital time when a group of fathers found out about it.

As it turns out, the people who can’t figure out what bathroom to use don’t know the difference between forward and backward. They call themselves progressives, but it’s hard for a thinking person to see what they’ve done as progress. That’s not to say they haven’t managed to do some good things, but even a blind hog finds an acorn once in a while. If words matter at all, they can’t keep the name progressives after what we’ve let them do to our country.

In 1982, we dreamed about the world we would live in after the turn of the century. The possibilities were endless, it seemed, even if we wouldn’t see such drastic changes in our lifetimes. We couldn’t have known that the science fiction we saw play out on the screen at the Plitt Theater that night would turn out to be a lot more believable than what really happened.