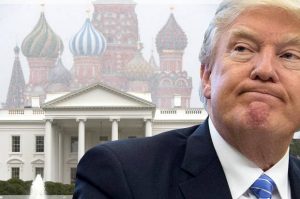 Don’t you hate it when the elephant that you’ve been trying to convince everyone is in the room just simply is…NOT IN THE ROOM!

I guess if you’re a democrat that has broken the law so many times it now seems like the acceptable standard operating procedure you’ll look in desperation for something to get the attention off of yourself.

Russia was the easiest target. I mean, what else can anyone else hate more than Russia and Donald Trump? Put the two together and you’ve got the perfect scapegoat.

How long can the lies live?

It would seem that democratic law makers and the mainstream media are looking to slink away from the Trump-Russia collusion narrative after almost 8 months of finding ZERO evidence.

Sorry folks it’s just not there!

A shocking excerpt from The Washington Post’s Ed Rogers said the following:

“While everyone is fixated on President Trump’s unbecoming and inexplicable assault on Attorney General Jeff Sessions, the media has been trying to sneak away from the “Russian collusion” story. That’s right. For all the breathless hype, the on-air furrowed brows and the not-so-veiled hopes that this could be Watergate, Jared Kushner’s statement and testimony before Congress have made Democrats and many in the media come to the realization that the collusion they were counting on just isn’t there.

As the date of the Kushner testimony approached, the media thought it was going to advance and refresh the story. But Kushner’s clear, precise and convincing account of what really occurred during the campaign and after the election has left many of President Trump’s loudest enemies trying to quietly back out of the room unnoticed.

Democrats and their allies in the media seem less eager to talk about it, and when they do, they say something to the effect of “but, but, but … Kushner didn’t answer every question … He wasn’t under oath … There are still more witnesses … What about this or that new gadfly?” They are stammering. And it hasn’t taken long for news producers and editors to realize that the story is fading.

At last, the story that never was is not happening.”

It has become obvious now that the American people have been force fed a hoax that was made up out of thin air and drilled into our heads by fake news sources.  Damage done. Let’s move on.