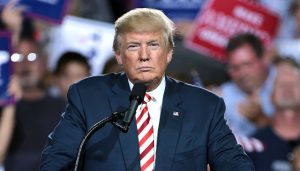 President Trump’s campaign released a rather fiery statement on Thursday, bashing the Commission on Presidential Debates for announcing plans to change the format of the next presidential debate to make it “virtual,” calling the timing “extremely suspect.”

The change in format comes as President Trump continues to battle against the coronavirus, which he tested positive for last week, but seems to be fairing well against it despite being part of the high-risk category of patients.

Here’s more on this from Daily Wire:

“The American people should not be deprived of the chance to see the two candidates for president debate face to face two more times just because the Commission on Presidential Debates wants to protect Joe Biden,” said Bill Stepien, Trump 2020 campaign manager. “It remains extremely suspect that the CPD announced the brand new virtual format at 7:30am ET today immediately after Vice President Mike Pence had just wiped the floor with Senator Kamala Harris.

“Clearly the commission wanted to shift attention away from Pence’s complete victory. As President Trump said, a virtual debate is a non-starter and would clearly be a gift to Biden because he would be relying on his teleprompter from his basement bunker,” Stepien said. “Voters should have the opportunity to directly question Biden’s 47-year failed record of leadership.

“We agree that this should happen on October 22, and accordingly, the third debate should then be shifted back one week to October 29. The CPD and the media cannot hide Joe Biden forever. Americans deserve to hear directly from both presidential candidates on these dates, October 22 and 29,” Trump’s campaign manager said.

There’s definitely some strange timing with all of this, though it’s understandable to want to push things back due to the president’s illness.

The big concern is that Biden might use other means such as a wire or a teleprompter to come up with better answers to questions than the ones he might think of off the cuff.

Biden has been suspected of having dementia due to some very weird gaffes and the trouble he seems to have staying focused during interviews and remembering questions.