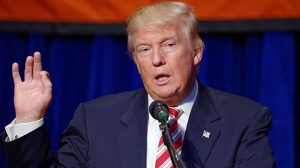 On Wednesday morning, President Trump took to Twitter to thoroughly shred national anthem protesting U.S. women’s soccer star Megan Rapinoe after her latest dig against him, and boy, the man did not hold back even a little bit.

It’s safe to say that Trump went totally nuclear here, and you know, she really does deserve it.

Trump, posting via Twitter, smacked Rapinoe for jumping the gun on the potential invitation, suggesting she “win first” before making such declarations. He also praised the women’s soccer team as a whole and extended an invitation to the White House for the athletes whether “win or lose.”

“Women’s soccer player, [Megan Rapinoe] just stated that she is ‘not going to the F…ing White House if we win,’” wrote the president. “Other than the NBA, which now refuses to call owners, owners (please explain that I just got Criminal Justice Reform passed, Black unemployment is at the lowest level […] in our Country’s history, and the poverty index is also best number EVER), leagues and teams love coming to the White House.”

“I am a big fan of the American Team, and Women’s Soccer, but Megan should WIN first before she TALKS! Finish the job!” Trump recommended. “We haven’t yet […] invited Megan or the team, but I am now inviting the TEAM, win or lose.”

Given the fact that in a previous interview Rapinoe stated that she will probably “never put [her] hand over [her] heart” during the National Anthem ever again, seeing her actions as a protest against Donald Trump, who she calls “small-minded.”

This woman is so desperate to look important and “woke” in the national spotlight it’s disgusting. She’s clearly begging for woke points and wanting to build a following to bolster her career, using a “protest” against Trump because she’s seen other professional athletes do the same thing.

Perhaps the rest of the team will be more gracious to the president’s offer of coming to the White House? Don’t hold your breath.