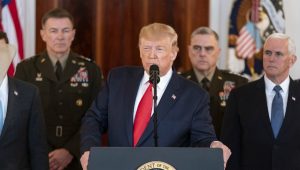 President Donald Trump has announced that he is once again going to address the coronavirus crisis currently making its way across the entire country in a presser to be held at 3 pm.

Fox News has been told by sources that the president is going to declare a state of emergency.

The announcement comes as major sporting and other events are called off or postponed, businesses across the country institute telework policies, government buildings and schools shutter and other disruptions rock the nation, amid efforts to curb the transmission of the virus. It also comes amid conflicting reports over whether another person who came in contact with Trump in recent days — Brazil’s President Jair Bolsonaro — tested positive.

Bolsonaro’s son Eduardo initially told Fox News that they were doing further testing to confirm the diagnosis. But minutes later, he told Fox News’ “America’s Newsroom” that the test came back negative.

Bolsonaro had been tested after one of his deputies, who also attended meetings at Mar-a-Lago with the president and vice president, tested positive for COVID-19.

President Trump and Vice President Pence, as of this writing, still have not been tested for the virus, which is a course of action they might seriously want to consider after having been exposed to several people with the illness.

On top of that, Sen. Lindsey Graham has self-quarantined after being exposed to the virus through the meeting with Bolsonaro’s team down at Mar-a-Lago. He joins others who have taken similar action, such as Sen. Ted Cruz.

Currently, Trump has put VP Pence in charge of the Coronavirus Task Force, leading the response of our nation against this awful pandemic that is causing a lot of havoc, both on our people — especially the elderly — and our economy.