Trump Supporter Gets Assaulted By Violent British Mob, Check Out What They Threw At Him 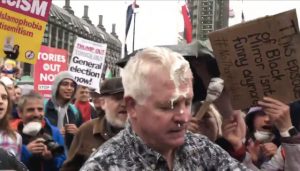 Violence from the radical left has become the norm ever since President Trump won the 2016 election, but it seems things are escalating more and more with each passing day.

A supporter of Trump’s was captured on video being assaulted by an angry, violent British mob during his visit to the country of Britain, becoming the latest victim of the leftist practice of “milkshaking.”

This is the kind of people the left is creating with their insane rhetoric and over-the-top theatrics involving political correctness. Folks can no longer express themselves without reverting to animalistic violence. It’s tragic.

Video recorded by a reporter from Leading Britain’s Conversation showed the man at first arguing with protesters while wearing a red “Make America Great Again” hat — the symbol of Trump’s 2016 campaign that’s become a lightning rod for a growing number of those on the left who say the MAGA hat is synonymous with racism, bigotry, and hatred.

At one point the mob — led by a livid light-haired female who stood just inches from the man’s face — chanted “Off our streets! Nazi scum!”

Finally, to the protesters’ delight, what appeared to be a milkshake landed on the man’s head.

The victim who had the milkshake thrown at him ended up tossing it at someone else and then tussled with a few other folks in the crowd before things finally settled down.

Here’s a short clip of some of the fisticuffs. Be warned, there’s some strong language used.

A Trump supporter is milkshaked by a hostile crowd in Parliament Square.

This kind of garbage simply needs to stop. If you are a person who is incapable of sharing your opinions and thoughts without hatred and violence, then keep your mouth shut and stay home. It’s really that simple.

The left is only further proving they are unruly children throwing a temper tantrum and not actual world changers like they delude themselves into thinking they are. It’s time for them to get a clue.

We shouldn’t tolerate this kind of behavior either. Folks who participate in this kind of violence need to be arrested and held accountable for their actions.