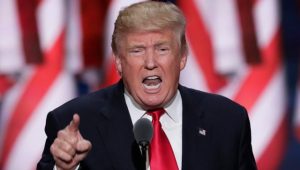 Earlier this year, the NFL grew a spine and decided to stand up to the players throughout the league who were kneeling down during the playing of the National Anthem as a form of protest against what they claim is racism in America.

This movement was launched by failed quarterback Colin Kaepernick when he played for the San Francisco 49ers. Kaepernick has really done a number on his career by choosing to use this particular moment during a game to get political, as all of the drama that comes along with his name has made him completely unattractive to other NFL teams.

The NFL decided to bar players from banning during the anthem, but still allows them to stay in the locker room while it’s being played. However, they can no longer use their time on the field for their political posturing.

Yet, despite this new rule, President Trump is still not happy, stating this new policy is actually worse than the first.

“I don’t want to cause controversy but how about they passed this stupid thing. You don’t have to do this anymore. If you don’t respect the flag or if you don’t like the country — or whatever it is — just go into the locker room,” Trump said at a Montana campaign rally.

This follows President Trump famously saying last year that the NFL should fire those “son of a b*tches” players who kneel during the National Anthem.

It’s easy to see the point the president is making here, as the NFL policy really only bans players from protesting on the field. It doesn’t actually promote love of country from those who have been blessed to make a lot of money simply playing a game.

However, the rule is definitely a step in the right direction and is proof that if you put enough pressure on these organizations, they will change their tune rather quickly.

The main reason this is such an issue is because disrespecting the flag is disrespecting the country, a nation that many have sacrificed life and limb to protect from threats inside and out. Even if you disagree with the fundamental values of an institution, don’t completely spit on the folks who have made it possible for you to have the opportunities you enjoy. It’s the epitome of an ungrateful heart.