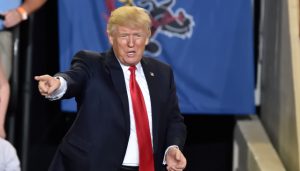 Jason Miller, President Trump’s campaign adviser, has stated Monday that during this week’s debate, if the moderator doesn’t actually do their job to ask Democratic presidential nominee Joe Biden about the Hunter Biden emails discovered on a laptop last week, the president will.

That’s probably a good idea, because so far, it’s been pretty clear that Trump isn’t going to get a fair shake by any debate moderator. He’ll have to take matters into his own hands and hit Biden where it hurts.

“I think Joe Biden is compromised … Joe Biden has now dodged this multiple times. Are you the ‘big guy?’ Are you the ‘chairman?’ Is Hunter Biden handling family expenses and setting aside money for you?” Miller said on FOX Business’ “Mornings with Maria.” “If Kristen Welker, the moderator, doesn’t bring it up, I think you’re pretty safe to assume that the president will. Again, these are real simple questions.”

The comments by Miller could indicate a renewed focus on attacks on Biden’s family from the Trump campaign as the presidential election is just over two weeks away. Miller also on Monday mentioned Joe Biden’s brothers, Frank and James, accusing them of being “grifters” and “making a lot of money off the system for years.”

Miller also doubled down on comments he made on Sunday criticizing the Commission on Presidential Debates for not focusing on foreign policy in what was the third scheduled presidential debate, after Trump refused to participate virtually in the second debate following his coronavirus diagnosis.

“We were supposed to have a debate largely focused on foreign policy this next Thursday, which would be perfect especially as we talk about the issue of Joe Biden potentially being compromised,” Miller stated during his interview on “Fox News Sunday.” “I wish we were spending a lot more time going into foreign policy, especially as President Trump has these peace deals that he’s able to point to.”

Miller went on to add, “We do know that Joe Biden lied to the American public when he said he never discussed his son Hunter’s business dealings… Joe Biden has not come out and himself denied any of these allegations … think we’re going to hear a lot more about this on Thursday at the debate.”

This Thursday’s debate is definitely going to be a fiery one. Will it hit the absurdly high aggressive tone of the first debate? It’s very possible. Heck, this one might even be worse.

Regardless, the president doesn’t have a choice but to come out swinging. He has to hold Biden’s feet to the fire and demand he answer these questions. The former vice president is being accused of abusing political power while in office, and if that claim is true — and there’s a lot of evidence saying it is — then he cannot be trusted in the Oval Office.