Trump says “Texas can handle anything!” – But something was missing… 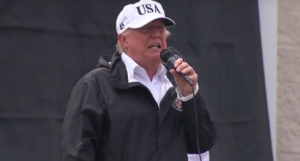 Today, in Corpus Christi, Texas, Trump gave a short speech to a crowd of supporters. He thanked Governer Abbott, Ted Cruz, and John Cornyn. The President also thanked the crowd for their support and continued on to say that the flooding was an epic and historic event. Despite everything he said, something seemed to be missing from his short speech. If the previous 8 years have taught us anything, it’s that we should expect more from a Presidential speech.

What was missing? I’m glad you asked… It seems that 45 was able to step up and show his true presidential colors by NOT politicizing the events on the coast. His speech was completely void of any gun control or racially charged rhetoric. How is this even possible?

Over the past 8 years we have come so accustomed to it, that it almost seems like a requirement. Well, I guess it just boils down to the fact that we finally have a real President again. When a caring and genuine President comes to help and support the American people, he sets aside his political agenda and does the right thing. Good on you, 45!!!