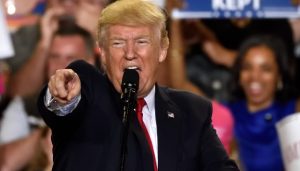 Former President Donald Trump has weighed in on the Supreme Court’s decision to allow a New York City prosecutor to look at his tax records, referring to it as a “continuation of the greatest political witch hunt in the history of our country.”

In an unsigned order earlier in the day, the Supreme Court denied Trump’s request for the justices to halt a lower court ruling instructing him to turn over materials to Cyrus Vance, the Manhattan district attorney. Trump’s tax returns, although not visible to the public, have been subjected to scrutiny amid allegations of bank fraud.

In another Supreme Court case regarding Trump’s tax returns last year, Chief Justice John Roberts wrote in the court’s majority opinion that even the dissenting justices agreed that Trump was not immune from a subpoena in New York.

“We reaffirm that principle today and hold that the President is neither absolutely immune from state criminal subpoenas seeking his private papers nor entitled to a heightened standard of need,” Roberts wrote.

Trump referred to Vance’s investigation into his taxes a “fishing expedition” that the Supreme Court should not have allowed.

The former president also went on to note that the investigation is happening in New York, a state “completely controlled and dominated by a heavily reported enemy of mine, Governor Andrew Cuomo.”

Trump then accused Vance of “headhunting,” which is what he described as attorney generals or prosecutors “who try to take down their political opponents using the law as a weapon.”