Trump Rips Ocasio-Cortez’s ‘Green New Deal.’ Her Response Proves He Got To Her. 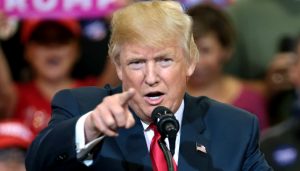 President Trump, notorious for his expertise in the world of trolling, took Rep. Alexandria Ocasio-Cortez to the woodshed, mocking her ridiculously dumb “Green New Deal” during a rally held in El Paso, Texas.

Not long after the comments were made, AOC struck back, proving what he said not only had merit, but got under her skin.

Ocasio-Cortez bristled, “Ah yes, a man who can’t even read briefings written in full sentences is providing literary criticism of a House Resolution. (‘Reading the intelligence book is not Trump’s preferred “style of learning,” according to a person with knowledge of the situation.’ – @washingtonpost).”

Ah yes, a man who can’t even read briefings written in full sentences is providing literary criticism of a House Resolution.

(“Reading the intelligence book is not Trump’s preferred ‘style of learning,’ according to a person with knowledge of the situation.”
– @washingtonpost) https://t.co/O7daeYlXZO

Ocasio-Cortez’s outburst followed a moment in Trump’s speech where he joked about the juvenile nature of the “Green New Deal Proposal,” which was widely derided after its release as childishly conceived. Trump stated:

It sounds like a high school term paper that got a low mark. It would shut down American energy which — I don’t think the people of Texas are going to be happy with that. (boos) It would shut down a little thing called air travel. How do you take a train to Europe? (laughter) You know, this crazy senator from Hawaii, they said, “Do you like it?” “Yes, I like it very much.” Oh really? How are we getting to Hawaii on a train? (laughter) She didn’t think about that one but she’s thinking about it. She’ll figure it out.

Trump was referencing a passage in the overview Ocasio-Cortez released regarding her “Green New Deal” in which it stated, “Yotally overhaul transportation by massively expanding electric vehicle manufacturing, build charging stations everywhere, build out high- speed rail at a scale where air travel stops becoming necessary, create affordable public transit available to all, with goal to replace every combustion-engine vehicle.”

Whoever wrote the proposal is, to put it kindly, dense. Idiotic. Moronic. Even Speaker of the House Nancy Pelosi (D-CA) found herself unable to pretend to take it seriously; she said she hadn’t seen it yet, but “it’s enthusiastic and I appreciate the enthusiasm.” This, not coincidentally, is precisely what I say when I find out that my 2-year-old son has used his magic markers on his bedroom wall.

It’s quite clear that AOC was deeply bothered by having her plan mocked by the President. Otherwise, she wouldn’t have been compelled to respond.

Much to her chagrin, we all have to agree with the president. The “Green New Deal” is an absolute travesty, a farce of the highest order. It’s basically just a document chock full of left-wing talking points and impossible to fulfill pipe dreams.

It’s not to be taken seriously. Most Democrats aren’t stoked about it either, if that tells you something.

It’s time for AOC to grow up a bit.