Trump Puts Biden On Blast, Accuses Him Of ‘Unforgivable Dereliction Of Duty’ 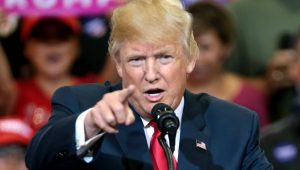 Former President Donald Trump has been launching attack after attack on President Joe Biden, and they are all very well deserved given his massive debacle in Afghanistan, which saw the country fall to the Taliban after he withdrew U.S. troops.

Trump recently accused the president of an “unforgivable dereliction of duty” due to this whole situation, and we all know that about sums it up.

Currently, there are many Americans and individuals from other Western nations who are finding it impossible to get out of the country due to thousands of locals, desperate to escape, gather outside of the Kabul airport.

“Leaving Americans behind for death is an unforgivable dereliction of duty, which will go down in infamy,” the former president proclaimed in a statement shared Friday by spokeswoman Liz Harrington on social media site Twitter.

Chaos around Kabul’s airport appears to be growing daily. U.S. troops have been firing warning shots to disperse the crowd of up to 50,000 Afghans surrounding the airport as Americans and other Westerners try to flee, the Daily Mail reported.

Trump on Newsmax Wednesday excoriated Biden’s failed and “humiliating” withdrawal from Afghanistan, saying “it’s inconceivable that anybody could be so incompetent, stupid.

“Use any word you want to use,” Trump went on to say during a chat he had on “Greg Kelly Reports.” “To imagine that you take out your military before you take out your U.S. citizens, and the civilians and others that maybe helped us – to even think of that, it’s not something that can be believed.”

Rep. Dan Crenshaw on Friday said Biden must authorize U.S. troops to expand the perimeter around Kabul’s airport and retake another air base to help with evacuations.

The Texas Republican, who served as a Navy SEAL for a decade and was wounded in Afghanistan in 2012, tweeted his thoughts early Friday morning.

“Two things need to happen, and only Biden can authorize: 1. US military must be allowed to operate outside Kabul airport to get American citizens. 2: Retake Bagram airfield, thus giving us more options for evacuations. Biden created this mess and needs to take decisive action,” Crenshaw said in a tweet.

Sen. Tom Cotton, another service veteran lawmaker, took to Twitter to call on President Biden to act swiftly in order to “stop this rolling humiliation” in the Afghan capital of Kabul.

“It’s time for President Biden to authorize the military to stop this rolling humiliation, expand the perimeter at Kabul airport, and rescue Americans trapped behind enemy lines,” Cotton stated on Thursday.