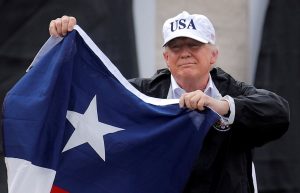 While the media’s focus during Hurricane Harvey and its disastrous aftermath in Texas has been on Melania’s footwear and the president’s tweets, Donald Trump has pledged to donate one million dollars of his personal money to relief efforts.

The media has now erupted with more criticism of President Trump in light of that announcement. Newsweek reminded everyone (not that anyone really reads Newsweek anymore) that “Trump is a billionaire who, during the U.S. presidential campaign described that amount of money as a “small loan.” They were referring to the $1 million his father gave him he when was getting started in the real estate business.

The Trump Administration has been applauded by Texas officials for the handling of the disaster, and leftists, with little left to criticize, simply can’t stand it. In the announcement, White House Press Secretary Sarah Sanders solicited suggestions from the press corps on the best recipients for his donation. We are certainly hoping the president will take the advice of Texans rather than those who have worked tirelessly to criticize his every decision.

President Trump and First Lady Melania visited South Texas on Tuesday, offering a needed morale boost to the people of Texas and making it clear that Trump’s administration, and America, stand with them. He has also vowed to return to the state soon.

Trump has donated the entirety of his his presidential salary since taking office. Sanders’ predecessor Sean Spicer similarly asked reporters in March to suggest worthy recipients of his donations. Since then, Trump has donated funds to the National Park Service and the Department of Education.

There are hardly any clouds in the sky today- @VP worked up a visible sweat as he helped clear tree branches around a home in Rockport pic.twitter.com/0CteHqcvnG

Of course Twitter then erupted with the accusations that Pence was simply there for a “photo opp” and was “auditioning for president.”

Regardless of people’s opinions of politics, the disaster relief efforts in Texas has been a clear demonstration of Americans helping Americans with compassion and solidarity.