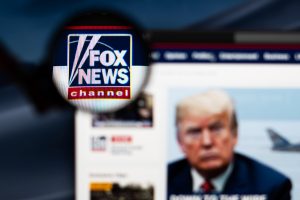 Over the weekend, President Donald Trump slammed Fox News over their consistently uncharitable coverage of the administration, warning followers that the network is “changing fast” for the worse.

“Watching @FoxNews weekend anchors is worse than watching low ratings Fake News @CNN, or Lyin’ Brian Williams (remember when he totally fabricated a War Story trying to make himself into a hero, & got fired,” Trump tweeted. “A very dishonest journalist!) and the crew of degenerate Comcast (NBC/MSNBC) Trump haters, who do whatever Brian & Steve tell them to do. Like CNN, NBC is also way down in the ratings. But @FoxNews, who failed in getting the very BORING Dem debates, is now loading up with Democrats & even using Fake unsourced @nytimes as a “source” of information (ask the Times what they paid for the Boston Globe, & what they sold it for (lost 1.5 Billion Dollars), or their old headquarters building disaster, or their unfunded liability? @FoxNews is changing fast, but they forgot the people who got them there!”

This isn’t the first time Trump has let Fox News have it. Last month, the President tweeted, “[email protected] Polls are always bad for me. They were against Crooked Hillary also. Something weird going on at Fox. Our polls show us leading in all 17 Swing States. For the record, I didn’t spend 30 hours with @abcnews, but rather a tiny fraction of that. More Fake News @BretBaier”

In April, the president said, “Many Trump Fans & Signs were outside of the @FoxNews Studio last night in the now thriving (Thank you President Trump) Bethlehem, Pennsylvania, for the interview with Crazy Bernie Sanders. Big complaints about not being let in-stuffed with Bernie supporters. What’s with @FoxNews?”

“Were @FoxNews weekend anchors, @ArthelNeville and @LelandVittert, trained by CNN prior to their ratings collapse? In any event, that’s where they should be working, along with their lowest rated anchor, Shepard Smith!”

And, back in January:

“Never thought I’d say this but I think @johnrobertsFox and @GillianHTurner @FoxNews have even less understanding of the Wall negotiations than the folks at FAKE NEWS CNN & NBC! Look to final results! Don’t know how my poll numbers are so good, especially up 19% with Hispanics?”

What do you think? Is Fox News headed toward the center—or worse, the left?