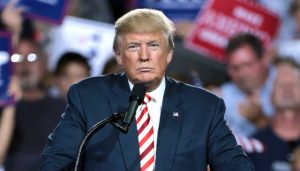 President Trump recently said that he would “certainly” entertain the idea of cutting economic ties between the United States and China if he should win a second term in the White House, in a move known as “decoupling.”

A Fox News interview with the president aired on Sunday night. During this interview, host Steve Hilton said that the United States doesn’t have to do business with China. Trump then spoke about decoupling, saying, “Well, it’s something that if they don’t treat us right,…I would certainly do that.”

Trade tensions, elevated by the coronavirus pandemic that originated in China, have aggravated relations between the two countries. Though a trade deal was signed in February this year, a meeting between U.S. trade representative Robert Lighthizer and Chinese Vice Premier Liu He to review it was postponed indefinitely in August.

“We were doing better than we’ve ever done with China, and I was all set to rock and roll. And then, we got hit with this damn situation,” the president added.

Trump, who is vying for a second term in November, has released an agenda that calls for bringing back 1 million jobs from China.

During a briefing that was held on Monday morning, Chinese Foreign Ministry spokesman Zhao Lijian responded to Trump’s comments on decoupling, calling instead for cooperation.

Yes, cooperation would be a smart move for all involved, but Trump has made it clear that as far as that is concerned, the ball is in China’s court. They can choose to be hostile toward us and not treat us with respect and end up hurting themselves in the long run, or they can come to the table with a healthy dose of respect.

After the coronavirus debacle they caused, I think Trump is being pretty gracious.