Trump is Right: 90% of Media Coverage on His Administration Has Been Negative 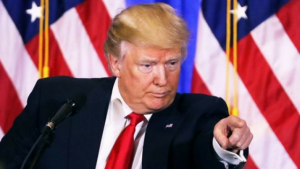 President Trump, who has been a very vocal critic of the media that we have known for years is boldly and blatantly biased, went on an epic Twitter rant over the weekend on how he has been treated by the legacy news media complex.

This isn’t news (bu-dum-hiss), Americans have known since long before Trump entered office that the media is slanted towards the left…often the far left.

All you need to do is compare the way they’ve treated Republican presidents vs. Democrat presidents.

Obama, in their eyes, could do no wrong…even when he was jailing journalists’ sources using the Espionage Act.

They even covered it. They just didn’t lose their ever-loving minds over it and claim that Obama was literally Hitler. Meanwhile, anyone on the right who criticized Obama for any reason was just a racist tin-foil-hatter, right?

It is definitely concerning whenever a political leader criticizes the media in a nation where free speech is considered sacred.

But the First Amendment protects the journalists from having their speech infringed, which is precisely what Obama did when he aggressively targeted the press.

Trump openly tweets his contempt for certain outlets who clearly have it out for him for personal political reasons.

So when he unleashed his contempt for the MSM, whether they like it or not, he was actually speaking to the resentment and distrust many Americans feel for the networks they’ve known for years are full of it.

Here’s what he said:

Trump is often accused of exaggerating but when it comes to the figure of 90%, it seems he was apparently correct.

The 90% figure is corroborated by two studies, one taken in 2017 and one taken in 2018, conducted by the Media Research Center which “studied all broadcast evening news coverage of the President from January 1 through April 30, and found 90 percent of the evaluative comments about Trump were negative — precisely the same hostile tone we documented in 2017.”

As noted MRC’s Richard Noyes, President Trump’s approval ratings actually increased during 2018. In order to conduct the study, MRC “examined all 1,065 network evening news stories about President Trump and top members of his administration during the first four months of this year. The coverage totaled a whopping 1,774 minutes, or roughly one-third of all evening news airtime.”

You don’t actually need these numbers to know the media will turn anything Trump does or says and spin it into something negative. Even when important news is happening elsewhere, they’re usually still obsessing over his latest tweet the way a single woman obsesses over a text from a date.

Trump doesn’t hate the First Amendment, and he’s definitely done more to preserve it than Democrats ever do.

He hates the news media that has been lying to the American people for decades, and who can’t stand that he actually speaks for the people when he bashes them.