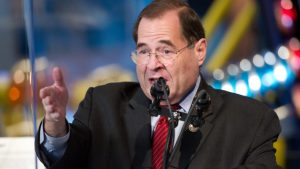 House Judiciary Chairman Rep. Jerrold Nadler, a Democrat, attempted to come to the rescue of Rep. Alexandria Ocasio-Cortez, hearing the damsel in distress taking hate for comments that trivialized the Holocaust by comparing the situation at the southern border to concentration camps.

Apparently, Nadler didn’t get the memo that women aren’t delicate little flowers, but are fierce warriors who will fight to the death to overthrow the patriarchy. Enjoy the sarcasm, folks.

Anyway, Nadler, in his defense, also trivialized this horrific event in world history.

One of the lessons from the Holocaust is ‘Never Again’ – not only to mass murder, but also to the dehumanization of people, violations of basic rights, and assaults on our common morality. We fail to learn that lesson when we don’t callout such inhumanity right in front of us.

One of the lessons from the Holocaust is ‘Never Again’ – not only to mass murder, but also to the dehumanization of people, violations of basic rights, and assaults on our common morality. We fail to learn that lesson when we don’t callout such inhumanity right in front of us. https://t.co/EEBBkVL7FG

Taking the phrase “Never Again,” which is inextricably aligned with the murder of six million Jews as they were shot in mass executions or gassed in the Nazi death camps, and using it willy-nilly for any situation in which people are suffering is by definition a trivialization. And of course, Nadler was missing in action when the Obama administration was putting illegal immigrants in cages, so it’s not surprising he would offer a knee-jerk defense of Ocasio-Cortez targeting Trump.

But then, Nadler was also a supporter of the Iran nuclear deal that the Obama administration championed that posed an existential threat to the state of Israel. As Rabbi Shmuley Boteach wrote in January 2016:

Nadler’s latest effort to rationalize his position appeared in an op-ed in the December 29th edition of the New York Jewish Week. Once again, like others who caved into the pressure from the White House, Nadler admits that the agreement is flawed, that “Iran will remain a major menace to the region and the world,” and that “even without nuclear weapons, a nuclear armed Iran would represent an unacceptable threat to the United States, to Israel, and to global security.”

The Holocaust is one of the most heinous mass murders to ever occur in world history and due to the fact that millions of people were wiped out based on their race and religion, it seems not making light of this event would be something the left would support.

Apparently, the only time radical liberals really care about the status of a minority group is when there is an opportunity to take advantage of said individuals in order to get more votes in upcoming elections.