Trump Fires Back At Obama, Harris After Attacks During DNC Speeches 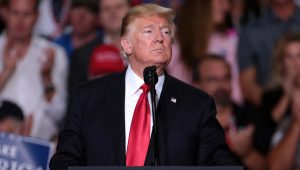 While vice presidential nominee Sen. Kamala Harris was delivering her remarks at the Democratic National Convention, an event being held virtually due to all the restrictions from the coronavirus, President Trump took to Twitter and went on a total tweet storm to combat the vicious attacks being launched his direction.

Trump drew attention to the tensions that existed between Biden and Harris during the primary season, something that a lot of folks on social media have been talking about since the announcement was made that Harris would be joining the ticket.

And as former President Barack Obama delivered his own address during the Democratic Convention, the president questioned why Obama had waited so long to endorse his former running mate.

“BUT DIDN’T SHE CALL HIM A RACIST???” Trump wrote on Twitter as the third night of the convention concluded with Harris’ remarks. “DIDN’T SHE SAY HE WAS INCOMPETENT???”

“HE SPIED ON MY CAMPAIGN, AND GOT CAUGHT!” Trump added later.

Obama did not endorse Biden until April, when he was all but assured the nomination. Bernie Sanders had already dropped out of the race and endorsed Biden. There were reports of tension between Obama and Biden all throughout the campaign trail, with The New York Times reporting Obama told Biden last August “you don’t have to do this.” One Democrat who spoke with Obama said he reportedly told him: “Don’t underestimate Joe’s ability to f–k things up.”

The current message of the Democratic National Convention is the same one being pushed at the mainstream media outlets across the country. Trash President Trump at all costs. Don’t provide anything of substance as far as solving our nation’s problems. Just bash Trump. That’s it. Simple mission.

Apparently, these folks have not learned a thing since 2016.