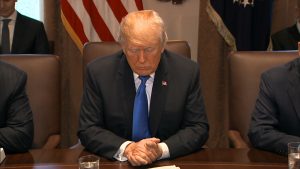 Sometimes, as we bicker over partisan politics and fret at the increasing divide in our nation, it can be easy to lose sight of just how short and precious life can be.

What was meant to be a simple tour and lake outing to a boatload of tourists in Branson, Missouri, yesterday afternoon, quickly turned deadly as gusty winds turned Table Rock Lake into a tumultuous sea.

An amphibious tourist boat carrying about 30 people capsized under the power of 75 mph winds, killing 11. Five more people are missing and presumed dead.

President Trump took some time out of his day Friday morning to extend condolences and comforting words to the families of the victims:

If you have any faith left in humanity, don’t read the comments on this Tweet. The President’s Tweets are normally a dumpster fire of inarticulate rage and bickering, but in this case, it takes a particularly new low considering there is literally nothing to politicize about this tragedy.

We really can’t lose our ability to come together as a nation and grieve when our fellow Americans experience profound horror and loss.

30 people set out on a boat tour in Branson yesterday for nothing more than some enjoyment and scenery, and at least 11 of those people never returned.

No guns, no terrorism, no political agenda, just a tragic act of God that reminds us how fragile life is in this fallen world.

Please pray for the families of the victims, and pray fervently that the missing may be located. Take some time today to hug your family and thank the Lord for another day with them.

Also, let’s take some time to pray for our nation. We live in the greatest country on earth, and while it’s easy to pin its shortcomings on liberals, we can’t discount the power of callous hearts and hatred for our fellow man. We need some healing right now.