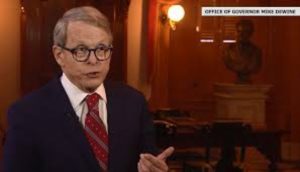 President Donald Trump seems to be dropping a few hints that he might support a primary challenge for Republican Ohio Gov. Mike DeWine in a tweet that was posted up Monday.

“Who will be running for Governor of the Great State of Ohio? Will be hotly contested!” Trump tweeted.

The president’s comment comes after DeWine, who was the co-chair of the president’s reelection campaign in the state of Ohio, spoke with CNN over the weekend and stated that Trump should start the transition to Joe Biden.

The president’s remarks added fuel to what some were speculating could be a potential gubernatorial primary challenge from Rep. Jim Renacci for the 2022 election, especially after Renacci tweeted, “Open up Ohio. Ditch DeWine” — one of a string of messages over the weekend on Twitter criticizing his fellow Republican.

Although Renacci has not declared that he is running for governor, he said, “It’s always the right for citizens to primary or run for office if they believe change is necessary. I never feared a primary when I was running,” the Dispatch reported.

Renacci has insisted that DeWine should not issue unilateral shutdown orders in response to the coronavirus crisis and should instead work with the Ohio General Assembly on a solution to the pandemic.

DeWine has been very, very busy pushing an agenda of fear concerning the coronavirus pandemic, often times putting on little press conferences featuring veiled threats of future action, like mask mandates or shutdowns, to try and force compliance with his measures to stop the spread of COVID-19.

At the end of the day, there are still many instances of voter fraud left to investigate and it’s critical for the survival of our republic that each one is properly looked into.

Without free and fair elections, America dies. Plain and simple.