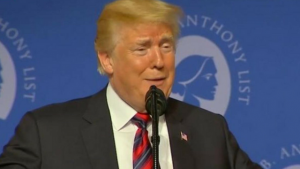 In 2016, many on the right were faced with a tough decision: vote for Trump to keep Hillary out of office, or take a stance against a man who was most likely not a genuine conservative at the risk of indirectly helping Hillary’s Presidential bid?

For many conservative Americans, the choice came down to a simple matter of life and death: if Trump was elected, he’d have a shot at at least one, most likely two SCOTUS nominees, which meant there was a chance the vital issue of abortion could face Justices who would, at long last, uphold the Constitutional right to life.

Avid Trump supporters and tentative Trump supporters alike have unquestionably been more than vindicated by the President’s beyond pleasantly surprising conservative record during his time in office, but it was nonetheless reassuring for the entire pro-life community that Trump took some time this week to reassure us that he remains committed to the right to life of all Americans.

On Thursday, the day after Supreme Court Justice Anthony Kennedy announced he would retire, which could prompt the Court to reconsider the fate of Roe v. Wade, President Trump issued a letter to the National Right to Life Committee reiterating his pro-life stance while promising to protect the dignity of unborn children.

“We all have a duty to defend the most basic and fundamental human right — the right to life. As President I am dedicated to protecting the lives of every American including the unborn,” Trump wrote in his letter.

“Since my first day in office I have taken concrete actions to defend the right to life. One of the first actions I took as President was to reinstate the Mexico City policy to ensure the taxpayer dollars are not used to fund organizations that perform abortions in foreign countries. I also signed into law legislation that allows states to prioritize how they spend their family planning grant money, giving States the choice to withhold taxpayer funding from organizations that perform abortions. Further, last month my Administration proposed updates to the regulations governing the Title X Family Planning program in order to improve Women’s Health and ensure that federal funds are not used to fund the abortion industry in violation of law.”

President Trump concluded by thanking the National Right to Life Committee for their work on defending the unborn.

“The National Right to Life Committee’s work is critical to protecting our nation’s most vulnerable,” he wrote. “Since 1968 you have provided a voice to the voiceless. Each day you help spread compassion and promote the dignity of every human person. I am truly grateful for your efforts and I remain committed to continue working with you as we cultivate a world that values and regards every human life.”