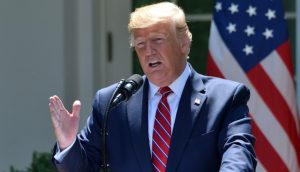 Former President Donald Trump released a statement on Tuesday delivering a one-two combo to President Joe Biden and his “weak sanctions” against Russia, stating that the nation “has become very rich,” which has resulted in a spike in oil prices.

Trump then claimed in his statement, which was issued by Save America, his political action committee, that “there was absolutely no reason that the situation in Ukraine should have happened at all,” and then went on to say that the sanctions being issued against Russia are both “weak” and “insignificant” compared to gaining control over Ukraine.

“If properly handled, there was absolutely no reason that the situation currently happening in Ukraine should have happened at all,” the former president said. “I know [Russian President] Vladimir Putin very well, and he would have never done during the Trump Administration what he is doing now, no way! Russia has become very very rich during the Biden Administration, with oil prices doubling and soon to be tripling and quadrupling. The weak sanctions are insignificant relative to taking over a country and a massive piece of strategically located land.”

“Now it has begun, oil prices are going higher and higher, and Putin is not only getting what he always wanted, but getting, because of the oil and gas surge, richer and richer. The U.S. was energy independent under the Trump Administration, an independence that we had never obtained before, and oil prices would have remained low. Now, what a mess our Country is in!” he added.

Trump is right on the money. Weak leadership is what has led this nation into more trouble than practically anything else. And once again, thanks to a Democrat, we are losing face in front of the whole world.

It happened when Obama was in office, and it’s happening again with Biden. This has to stop.