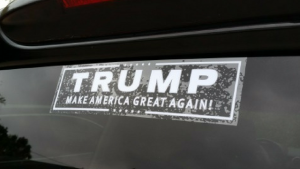 The condition, which afflicts an untold number of progressives, can cause lack of self-awareness, unprovoked fits of rage, extreme sensitivity to hearing the name “Donald Trump”, and dangerous allergies to hearing opinions that conflict with your own.

We always encourage anyone who believes they are suffering from TDS to immediately locate the nearest straw and suck it up, it’s been two years and the world hasn’t been destroyed yet, we survived eight years of Obama, you can deal with a few more years of Trump. Deal with it.

In one extreme case of TDS, a young woman became so infuriated that another driver had slapped a Donald Trump sticker on his personal vehicle and dared drive said vehicle down a public street, she was actually willing to damage her own vehicle and risk misdemeanor charges just to vent said infuriation at said driver.

Yes, by the way, this really happened.

Massachutes woman Chloe Wright, 25, pled not guilty on Wednesday to charges of assault with a dangerous weapon and is also facing hit-and-run and vandalism of private property charges.

It all started when a Barnstable man called police to report a hit-and-run on June 30th, which began when the driver behind him at a red light began honking their horn at him.

The Cape Cod has the rest of the story:

The man continued driving onto Bassett Lane and the car followed, with the driver still honking, the man told police, according to the report. When he stopped again for a red light at the intersection with North Street, the driver also began yelling, the man said.

“She said, ‘You voted for Trump?’” the man wrote in a statement. “I said yes. She called me a racist and several other names.”

“She bent my door and I had to lean back to avoid getting hit,” the man wrote. “She also hit the side of my car.”

After that, the woman fled the scene.

But–oops!–the driver of the car she hit captured her vehicle and license plate on video.

She’s due back in court on August 28th for another hearing.