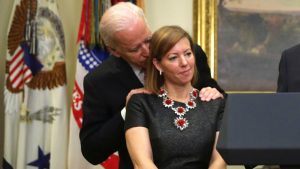 President Trump has a few vital factors to his penchant for winning (and winning and winning until you get sick and tired of winning and just can’t take it anymore).

He has an uncanny ability to tap into the psyche of regular, everyday American people.

He has mastered the art of using his Twitter account as the laser pointer to the cat that is the mainstream media.

He has managed to seamlessly translate his lifelong business savvy to economic policy.

And he knows how to use awesome nicknames to destroy political opponents.

In the case of one of his potential 2020 challengers, however, the master of branding is likely to simply capitalize on a nickname that likely Democratic contender, Joe Biden, has earned very well for himself all on his own.

We’re talking about the well-suited monicker “Creepy Joe”, which the New York Post reports the Trump campaign is planning on using for the upcoming campaign.

“The current favorite for the former veep is ‘Creepy Joe,'” they explain, “a reference to Biden’s supposed habit of touching and kissing strangers and staffers alike.”

“Creepy Joe” has long been know as “Creepy Joe”, so if Trump decides to start dropping this during rallies and on Twitter, it’s likely to stick, meaning Biden will have a very hard time shaking the connotations.

Just like “Pochohontas” or “Crooked Hillary” for Dems Elizabeth Warren, who is well-known for her fake Indian status, and Hillary Clinton, who is crooked as all get-out and everyone knows it, “Creepy Joe” is a well-supported nickname.

Here are just a few examples of the former VP’s utter creepiness, from a series of tweets last year put together by Turning Point USA’s Richard Armande Mills:

If that wasn't disturbing enough, in this clip, Biden not only touches a young woman but smells her hair, kisses her, whispering something into her ear, only to tell her "see you back home, I hope" after visibly creeping out her and who I assume is her mother. pic.twitter.com/WrFLWmAPFJ

In this clip, Biden swears-in (R) Senator Jim Risch. During photographs, Biden touches Risch's daughter, specifically asking to take a photo alone with her. You can hear Risch say "Dad's going to stand pretty close." (I wonder why?) Biden even jokes and says, "If I was young…" pic.twitter.com/LLqJ4guU0q

In this clip at another swearing-in ceremony, former VP Biden starts strangely sniffing the hair of a very young girl (he just met) repeatedly, also kissing on her. This man clearly has no boundaries. pic.twitter.com/MxYxEJVDRR

Biden almost always seems to immediately inquire about the age of the girls he meets during these ops. He also has a habit of creepily saying "no serious guys till you're 31." "Serious" guys? The way he handles young girls is discomforting to watch. You can see it on their faces. pic.twitter.com/AH0V41WiQG

A lot of the family members involved in these awkward moments don't know how to respond to Joe Biden preying on their young female relatives. Jeff Sessions, however, knows exactly what to do. Watch as he swats Biden's hand from touching his granddaughter. Wonder why he'd do that? pic.twitter.com/YNw5ZHlXWP

Why must former Vice President Joe Biden habitually smell the hair of the women, little girls, and babies he meets? pic.twitter.com/U53mdueVFi