Trump Campaign Posts Hunter Biden Video On Twitter, End Up Getting Suspended For It 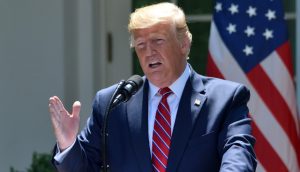 Twitter, one of the world’s leading social media companies, has decided to suspend the official Trump reelection campaign account after they tweeted out a video of Hunter Biden and called Democratic presidential nominee Joe Biden, Hunter’s dad, a liar. The company said this is a violation of their policies.

You know, freedom of speech isn’t just a law in the Constitution to protect us from the government silencing our voices. It’s a principle that folks are supposed to live by. The fact that calling someone a liar and posting a video with need-to-know information that demonstrates an individual who was at one time a high ranking person in our government might have abused his power is something these people at Twitter want to stop is concerning.

“You may not publish or post other people’s private information without their express authorization and permission,” the post reads.

Twitter has suspended ⁦@TeamTrump⁩ for posting a video calling Joe Biden a liar who has been ripping off our country for years, as it relates to the ⁦@nypost⁩ article.

19 days out from the election. pic.twitter.com/Z9FFzridyr

So what did the tweet say, exactly, that got Twitter’s feathers all ruffled up? It said, “Joe Biden is a liar who has been ripping off our country for years.”

Given the information that has recently been released about Hunter Biden and how his dad, while vice president, used his political office as a means of getting a prosecutor fired for investigating his son’s company, calling him a liar — he denied ever even meeting folks at Burisma Holdings, but we now know that’s not true — doesn’t really seem like it should be a problem.

The campaign also posted a link to a video about Hunter Biden’s overseas business dealings, specifically referring to the New York Post which published emails suggesting Hunter Biden introduced his father, then the vice president, to a top executive at Ukrainian natural gas firm Burisma Holdings in 2015 at Hunter’s request. Fox News has not independently verified the reporting.

Strangely, the video in question is, at the time of this writing, still up over at President Trump’s profile, though how long that will be the case is anyone’s guess.

“This is election interference, plain and simple. For Twitter to lock the main account of the campaign of the President of the United States is a breathtaking level of political meddling and nothing short of an attempt to rig the election,” Trump campaign communications director Tim Murtaugh stated to the folks over at Fox News. “Joe Biden’s Silicon Valley pals are aggressively blocking negative news stories about their guy and preventing voters from accessing important information. This is like something from communist China or Cuba, not the United States of America.”

One of the most important pieces of the fabric that makes up our great nation is freedom of speech. If this thread is pulled and removed, the whole thing comes apart. This is why we must fight to the death to protect speech, especially speech made in the public square.

Twitter and other social media companies might not want to hear this, but they are the modern era public square. Since they play such an important part in the dissemination of information, they are more than just a private company. They are a publisher. This means the First Amendment is not just a guideline, but a law they are to follow.

Let’s hope they soon learn this lesson and stop trying to silence the voices of the opposition.