Trump Apparently Cracked a Joke to Canada’s Trudeau Amid Tense Negotiations, What He Said Is HYSTERICAL 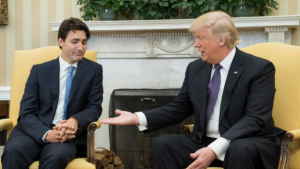 Trudeau calls himself a “feminist” and is so painfully politically correct that he once corrected a woman for saying “mankind” instead of “peoplekind”, a phrase so ridiculous that literally no one uses is except Trudeau (which may have something to do with the fact that it just so happens to not be a real word.)

So one would have certainly loved to be a fly on the wall during a tense conversation they had over the Trump-imposed tariffs on Canadian goods that have attracted criticism from our Northern ally.

Fortunately for CNN, and for the rest of us, in fact, there was a fly on the wall that was willing to reveal an unbelievably hilarious, and utterly Trumpian, joke that POTUS cracked during the phone call.

In a very important, very “exclusive” report by CNN, sources say that President Donald J. Trump waxed historical in his rather “testy” call with his Canadian counterpart Justin Trudeau.

According to CNN, in his May 25 phone call with Trudeau about the new tariffs on steel and aluminum imports the Trump administration is imposing on Canada, Trump went full 1812 on the prime minister.

Here is what Trump said, according to CNN:

According to the sources, Trudeau pressed Trump on how he could justify the tariffs as a “national security” issue. In response, Trump quipped to Trudeau, “Didn’t you guys burn down the White House?” referring to the War of 1812.

This is funny on so many levels. First of all, Trump actually said this to Trudeau, which is amazing. Second of all, to think of docile Canada burning down the White House is pretty hysterical on its own. Third, a fact which CNN was delighted with, Trump was actually mixed up about his history. They clarify:

Historians note the British attack on Washington was in retaliation for the American attack on York, Ontario, in territory that eventually became Canada, which was then a British colony.

The Daily Wire says that “CNN reached out to the White House and the National Security Council, but unsurprisingly couldn’t get anyone to bite on the War of 1812 reference. However, a senior administration official did acknowledge to CNN that ‘some of the President’s conversations with his foreign counterparts on the subject of trade have been confrontational.'”

One thing you’ve got to love about Trump is his particular style of “confrontation” is absolutely hilarious.