Trump: America Disrespected By Other Countries Because Of Biden 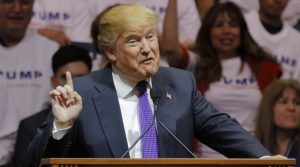 Former President Donald Trump stated that the U.S., under the poor leadership of President Joe Biden, has lost the respect of other countries around the world.

Trump’s remarks were made during the Tuesday episode of “The Michael Savage” podcast.

“The problem that we have is that we’re not respected as a country anymore,” Trump went on to say during the interview.

“When I left … we were respected by everybody and that includes China. I don’t think we’ve ever had a time in our country like this where we are so totally disrespected,” he said.

Trump then stated that the whole debacle unfolding with Russia and Ukraine would never have happened if he were still the president.

“This would never have been on the table,” the former president said. “I had a very good relationship with [Russian President Vladimir Putin]. It was made much tougher because of the Russia hoax, which is now being exposed as bigger than Watergate. And the second biggest scandal is that the newspapers agree that it’s the biggest, but they refuse to write about it.”

“The thing that is happening now is, I think, the Americans played right into [Putin’s] hands because they made it very severe and they gave him a lot of cards. Now, he’s got the cards and if they make a settlement, he’s going to make a hell of a settlement out of it,” Trump stated.

“But what’s happened is that by talking of the severity, they’ve given him a lot more cards than he had at the beginning,” he continued.

He said special counsel John Durham’s findings, resulting from probing the origins of the FBI’s investigation into claims of Trump’s links to the Russian, is bigger than any revelations from the Watergate scandal.

“You see what came out: The whole thing was a hoax,” he went on to say. “They were infiltrating the Oval Office. That would be punishable in the most stringent way. It’s a spying operation. And they took their spying operation into the oval office. And the press, I guess, is afraid or they’re just bad news or they’re communists and they don’t want to write about it. It’s bigger than Watergate.”

Trump then compared the reluctance of the mainstream media in covering the scandal to the communism.

“And that to me is the beginning of communism,” the former president said. “That’s how it all starts.”

During the interview, Trump also delivered some harsh words for Senate Minority Leader Mitch McConnell, a Kentucky Republican, noting that he helped McConnell win reelection in the Senate.

“He asked me to help him,” Trump went on to say. “I helped him. I endorsed him. He went up 20 points. If I would have run somebody in Kentucky, they would have won in the primary. And I should have done it. You know some of these guys get elected and they go rogue. It’s one of those things.”

Trump was then asked during the interview if he would consider choosing Florida Gov. Ron DeSantis as his running mate if he chooses to run in 2024.

“We have a lot of very good people, who could be vice president. Really good people,” he replied. “I endorsed Ron … after I endorsed him, he went up like a rocket ship. I’m very strongly vested and invested in him. He’s a good guy and he’s doing a good job. And we have others who are doing a great job.”