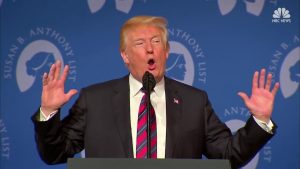 One of the biggest reasons that people found themselves voting for Trump in 2016 when they would have preferred essentially any other Republican candidate is that they were sick and tired of seeing their tax dollars go to fund abortion.

This decision was given extra weight following the explosive videos released by the Center for Medical Progress that gave a chilling inside-look into the harvest and trade of fetal tissue parts for profit.

If the Trump administration was going to do anything to stop this barbaric practice and finally defund Planned Parenthood, it seemed worth it.

Well, while the Republican Congress seems to have failed for yet another year to defund Planned Parenthood, a huge disappointment for many conservatives, the Trump administration has taken a significant step in disassociating from the barbaric practice of fetal organ harvesting, a move which had mixed reactions from the Center for Medical Progress and other pro-life groups.

The Trump administration has severed its connection with a company that was linked to the scandal in which Planned Parenthood harvested the parts of aborted children to sell to researchers.

The Department of Health and Human Services announced the decision on Monday.

“After a recent review of a contract between Advanced Bioscience Resources, Inc. and the Food and Drug Administration to provide human fetal tissue to develop testing protocols, HHS was not sufficiently assured that the contract included the appropriate protections applicable to fetal tissue research or met all other procurement requirements. As a result, that contract has been terminated,” HHS said in a statement.

The company was working with the Food and Drug Administration, NBC reported, in a deal that became public in August, creating a firestorm of protest from some pro-life groups.

Last week, 85 members of Congress made their concerns about the contract known to FDA Commissioner Dr. Scott Gottlieb.

“We are alarmed that the FDA has continued to award contracts to ABR for the procurement of human fetal tissue,” the letter said.

“Unborn children are not commodities to be bought and sold,” it continued. “The practice of conducting research using the body parts of children whose lives have been violently ended by abortion is abhorrent.”

The Trump Administration has ended a contract with a company that harvested fetal tissue from aborted babies.

This is a great step in the right direction of completely halting federal funding from supporting this grotesque practice. https://t.co/lF5kXKwa4z

David Daleiden, the man behind the Center for Medical Progress’ videos, called the move a “small step”, but underscored just how much our federal government continues to support abortion:

“So long as HHS trades taxpayer dollars for freshly-aborted baby body parts, the U.S. government is setting its own abortion quotas and sending the message that these children are worth more dead than alive,” he said in a statement, which said the contract with ABR “never should have been signed in the first place.”

“HHS has taken a small first step to stop the epidemic of trafficking tiny baby hearts, lungs, livers, and brains from late-term abortion clinics into government-sponsored laboratories for taxpayer-funded experimentation,” the statement said.

The pro-life group Susan B. Anthony List had similar feelings:

Marjorie Dannenfelser, president of the Susan B. Anthony List, said the action is a good step, but many more are needed.

“Canceling a single contract and conducting a review is a small step forward, but overall is completely inadequate,” she said.

Midterms are coming up folks, and they’re just as vital as 2016 if we actually want to see Planned Parenthood properly defunded. POTUS can only do so much…we need a Congress who will defend the rights of the unborn.