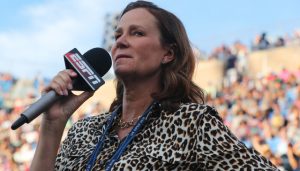 Mary Trump, niece of President Donald Trump, is set to release a book here soon slamming her famous uncle in a thousand different ways, one of which happens to be an allegation that he paid his late friend Joe Shapiro to take the SAT for him.

Pam Shriver, a tennis analyst for ESPN, is the widow of Shapiro and has come out denying the claim.

“When you put somebody’s name in print in a book, you want to make sure the facts around it are correct, especially if they are not living because it’s not like Joe is here and he would have known how to deal with this,” Shriver said in a video posted to social media on Wednesday.

She also said her late husband met Trump during their time at the University of Pennsylvania, which would have been years after the president had taken the SATs, because he originally went to Fordham University for two years before transferring.

“My late husband Joe Shapiro passed away 21 years ago. He was a man of great integrity, honesty; he was a hard worker. He was literally the smartest person I ever met,” Shriver added.

It’s important to note that the book, Too Much and Never Enough: How My Family Created the World’s Most Dangerous Man doesn’t actually contain much in the way of evidence to support the insane claim made by Ms. Trump.

The White House has also come out and strongly denied the allegations.

Could this be yet another wild attempt by the left to discredit the president and try and convince folks to vote against him in November? When you look at how much these people really hate Trump, it’s astounding. Have you ever seen these folks go so hard against a Republican president before? It’s unprecedented.

It’s important for voters to read between the lines. They don’t just hate Trump. By extension, they hate you. They don’t want you to stand up for yourself, to dare to go against their progressive agenda and the transformation of America into a socialist nation.