Trial Judge In Chauvin Trial Hammers Waters; Says Her Comments Could Lead To ‘Whole Trial Being Overturned’ On Appeal 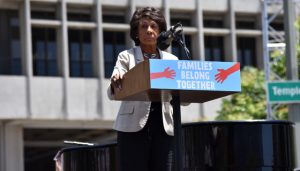 The judge who is currently presiding over the trial of former Minneapolis police officer Derek Chauvin, who has been charged with the murder of George Floyd, dropped the hammer on Democratic California Congresswoman Maxine Waters, saying that comments she made over the weekend could lead to the “whole trial being overturned” on appeal.

“And it is so pervasive that it is I just don’t know how this jury it can really be said to be that they are free from the taint of this,” Derek Chauvin’s lawyer said while addressing Judge Peter Cahill earlier this week. “And now that we have U.S. representatives, threatening acts of violence in relation to the specific case, it’s mind boggling to me, judge.”

“Well, I’ll give you that Congresswoman Waters may have given you something on appeal that may result in this whole trial being overturned,” Cahill replied.

“I’m aware that Congressman Waters was talking specifically about this trial, and about the unacceptability of anything less than a murder conviction, and talk about being confrontational,” Cahill continued. “But you can submit the press articles about that. This goes back to what I’ve been saying from the beginning. I wish elected officials would stop talking about this case, especially in a manner that is disrespectful to the rule of law, and to the judicial branch and our function.”

Cahill said that a “Congresswoman’s opinion really doesn’t matter a whole lot,” before saying that the motion for a mistrial was denied.

House Minority Leader Kevin McCarthy announced that he is introducing a measure to censure Waters for her remarks, which will result in her losing the position as chairwoman on the House Financial Services Committee if it passes.

Chauvin trial judge denies the defense's request for a mistrial, BUT he did SLAM Maxine Waters for her threatening comments in Minnesota this weekend to jurors, calling them "abhorrent" and "disrespectful to the rule of law and to the judicial branch and our function." pic.twitter.com/rAoa1QvcqZ

Waters has a reputation for stirring up folks to violence. A few years back she actually encouraged liberals to harass Trump administration officials out in public. And that’s just one example of many.

If a Republican were to engage in such rhetoric, folks would be demanding that individual be impeached and charged with insurrection or something of that nature.

But if you’re a Democrat, well, that changes everything.