Tri-State Governors Agree To Shutdown Theaters And Gyms, Place Restrictions On Restaurants In Response To Coronavirus 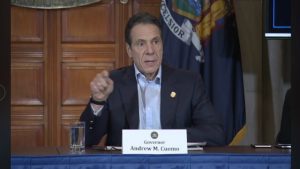 With the coronavirus spreading like wildfire across the country, individual states are attempting to implement a number of strategies designed to “flatten the curve” and hopefully prevent as many new cases of the illness as possible.

Governors from New York, New Jersey, and Connecticut have all put policies in place to limit crowds to 50 people or less, place heavy restrictions on restaurants and bars making them takeout and delivery only, and to close all movie theaters, gyms, and casinos.

“We have agreed to a common set of rules that will pertain in all of our states, so don’t even think about going to a neighboring state because there’s going to be a different set of conditions,” New York Gov. Andrew Cuomo said on Monday.

#BREAKING: NY, CT and NJ are taking joint regional action to reduce the spread of #COVID19:

The move follows the lead of other states such as Ohio, Illinois, California, and and localities that have begun announcing closures or restrictions of bars and restaurants as well as instituting bans on large gatherings.

The Centers of Disease Control and Prevention released updated guidance on Sunday that recommended organizers “cancel or postpone in-person events that consist of 50 people” for the next eight weeks.

After taking quite a bit of heat for not closing public schools, New York City Mayor Bill de Blasio announced on Sunday that the school system would be shutdown until at least April 20, though he did admit that it’s possible they could be closed for the rest of the year.

The World Health Organization announced last week that the coronavirus outbreak would be considered a pandemic. On Friday, President Trump declared a national emergency. As of Monday morning, there have been 3,774 cases of the illness reported and 69 deaths.