Trey Gowdy Goes on the War Path, Takes Down Comey over Clinton Probe 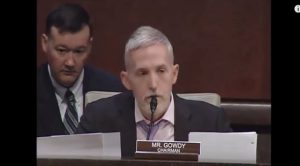 If there’s one thing we’ve learned about Rep. Trey Gowdy over the years, it’s that he’s not the kind of guy to take it easy on folks who abuse their power and participate in corruption, a truth we have seen take center stage in many hearings.

Well, now Gowdy has a brand new target in his sights, and it’s none other than former FBI Director James Comey, a man who has caused significant issues for the Trump administration after leaking information to those who were not authorized to have it in the media.

On Tuesday, Gowdy opened a House Oversight Committee hearing with a scathing takedown of Comey, condemning him for a “watered down” investigation into Hillary Clinton over the use of a private email server.

This is truly epic.

The former federal prosecutor laid into Comey for his handling of the Hillary Clinton email case, in which the former Secretary of State was cleared by the FBI. He called Comey’s probe “watered down” and said the former director had acted as judge and jury — and a few other posts, as well.

“We see Jim Comey and Jim Comey alone deciding which DOJ policies to follow and which to ignore,” he said.

“Instead, he appointed himself FBI director, attorney general, special counsel, lead investigator and the general arbiter of what is good and right in the world according to him,” Gowdy said.

“These exact same FBI agents and attorney prejudged the outcome of the Russia investigation before it even began,” Gowdy said.

Don’t you just pity the fool who has to come across the bad side of Trey Gowdy? The man is brutal to the max, but always fair and just in his assessment of folks who have been caught in shady behavior.

Still, it can’t be pleasant to be on the receiving end of one of his lashings.