Traumatized By 2016, Dems Experiencing Anxiety, Nightmares Ahead of Midterms 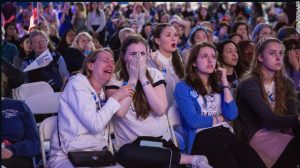 “We’re kind of just in the bed-wetting phase now,” says Democratic pollster John Anzalone, according to a new report from Politico.

Democrats, terrified of a repeat of 2016 on Tuesday, are creating contingency plans for election night, flocking to therapists’ offices in droves, and fearful of trusting any polling data in their favor.

Politico shares more of what they found:

A study published last month in the Journal of American College Health found that one-quarter of college students experienced “clinically significant” symptoms of trauma from the 2016 election results.

At Vassar College in upstate New York, the college Democrats are moving their results-watching party to a new venue over concerns that revisiting the scene of their 2016 letdown would be too upsetting for some students, according to a member of the group. At Brown University in Rhode Island, the College Democrats have taken the same precaution after experiencing a “collective flashback” to Trump’s victory during a discussion of election night planning.

A September AP/MTV poll found that 61 percent of Democrats ages 15 to 34 reported feeling anxious over the midterms, up 22 percentage points from July.

But pre-midterm stress syndrome isn’t afflicting only young people: A YouGov survey released Friday found that Democrats are 50 percent more likely than Republicans to report that they are “eating their feelings” ahead of the midterms. Other recent polling has registered high levels of stress among Democrats ahead of Tuesday’s elections.

I have to say that while this is definitely chuckle-worthy, more so, it’s just kind of sad.

This is a tense election for Republicans as well, and considering how violent and hateful the left is towards everyone even slightly right of center, conservatives would have every reason to be tense and anxious as well.

The reason most people on the right aren’t waking up in cold sweats or planning to avoid triggers on election night boils down to the ideological differences between the two parties.

At the risk of sounding incredibly harsh, the Democrats’ core philosophy these days is based entirely on feelings, so they can’t even cope with the ups and downs of adult life anymore without wallowing in emotion and paranoia.

They have no sense of personal accountability or a need for resilience because they’ve invested so much faith into the system.

Conservatives, on the other hand, while certainly far from perfect, tend to err on the side of defiance and resolve when things don’t go their way because our core philosophy is based on independence, individuality, and self-reliance.

Whatever the outcome Tuesday night, conservatives will still be conservatives, and we’ll have our values whether or not our representatives reflect that.

Democrats are increasingly lost and confused as their party crumbles around them.

On a human level here, maybe we can take some time to pray for Democrats since so many of them are apparently total wrecks.