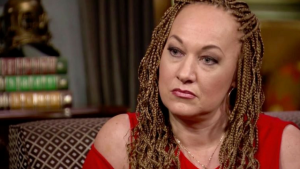 It’s not incredibly shocking to learn that someone who lived her life as a black woman when she was really a white woman is a fraud in more ways than one, but in this most recent case, Rachel Dolezal, the “transracial” Spokane woman who headed the local NAACP chapter until she was busted out by her own parents, was actually breaking the law.

No, perming her hair, getting a tan, and claiming she identified as a black person wasn’t a crime, but no matter what the color of your skin is, welfare fraud will land anyone in the hot seat, and that’s just what’s happened to our old pal Rachel.

Ms. Dolezal, who legally changed her name to Nkechi Diallo in the wake of her “transracial” flap, has been charged with three counts — theft by welfare fraud, perjury, and making false claims to get public assistance. According toKHQ-TV, which broke the charges, she could get up to 15 years in prison.

She received this assistance by reporting that her income was usually less than $500 per month in child support payments, a statement contradicted by bank records obtained by state officials, KHQ reported.

“The bank records, court documents say, showed Diallo had deposited about $83,924 into her bank account in several monthly installments between August 2015 and September 2017, without reporting the income to the Department of Social and Health Services. The money, according to the case file, had come from authoring her book, ‘In Full Color,’ speaking engagements, soap making, doll making, and the sale of her art,” KHQ wrote.

Whoever knew faking your ethnicity could be so lucrative?

Of course, no one can truly be an ethnicity they’re not, just as people can’t say they’re anything they’re not and have it be true–man, woman, unicorn, whatever.

If we can learn anything from this bizarre woman, it’s that, at the end of the day, no matter how you identify, pretending to be something you’re not–whether that’s black, or poor–doesn’t usually end up very well.