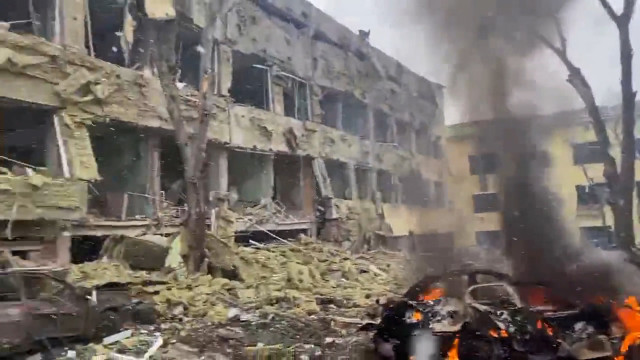 According to a report from The Washington Examiner, an airstrike hit a maternity and children’s hospital in the city of Mariupol on Wednesday. As of this writing, there is an unknown number of children and adults who have been buried beneath the rubble, according to Ukrainian officials.

“The maternity hospital, children’s ward, and department of internal medicine were all ‘destroyed’ after Russian military aircraft dropped multiple bombs on the hospital, Head of the Donetsk Regional Administration Pavlo Kyrylenko said. At least 17 women and staff members were injured in the attack, regional police confirmed to CNN,” the report continued.

“The building of the medical institution where the children were treated recently was completely destroyed. Information on the affected children is being clarified,” Mariupol City Council went on to write in a message posted on Telegram.

Videos posted up of the aftermath of the attack show portions of the building defaced, exposed wires everywhere, and civilians walking out of the facility holding on to each other’s shoulders for support.

One photograph seemingly shows the site where a bomb dropped and left a huge hole in the ground.

Ukrainian President Volodymyr Zelenskyy took to Twitter to confirm the strike, going on to post that “people, children, are under the wreckage.”

“How much longer will the world be an accomplice ignoring terror? Close the sky right now! Stop the killings! You have power but you seem to be losing humanity,” Zelensky stated.

Mariupol. Direct strike of Russian troops at the maternity hospital. People, children are under the wreckage. Atrocity! How much longer will the world be an accomplice ignoring terror? Close the sky right now! Stop the killings! You have power but you seem to be losing humanity. pic.twitter.com/FoaNdbKH5k

Again, officials in Ukraine have not given any indication about how many casualties there were or how many civilians might be trapped in the wreckage.