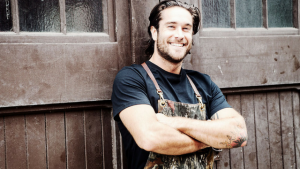 A group of vegan activists targeting the Antler Kitchen and Bar in Toronto has met their match in head chef and owner Michael Hunter, who refuses to bend to their demands.

The Blaze reports that Hunter is calling their latest demands “extortion” and downright refusing to comply to their offer to strike a deal.

The group, Grassroots Anti-Speciesism Shift, has offered to put an end to their harassing presence outside the Antler Kitchen and Bar if Hunter would agree to post an animal rights slogan in the window of his establishment.

“Animals’ lives are their right. In their desire to live and capacity to suffer, a dog, is a pig, is a chicken, is a human. Reject speciesism,” the sign would read.

“We’re not going to — there’s no way,” Hunter said during the Joe Rogan Experience podcast last week, the National Post reports. “It’s like eco-terrorism, extortion, whatever you want to call it.”

Hunter, who calls himself “The Hunter Chef” for his passion for wild game and is also an advocate for ethical farming, first gained attention on the internet for butchering and eating a deer leg right in front of the protesters last month, which is incredibly awesome.

The Blaze reports that when Hunter refused the protester’s offer, they took it upon themselves to try to project the slogan on a wall next to the restaurant, but Toronto police would not let them.

Instead, they remain outside, holding signs and playing videos of animals being slaughtered and skinned on loop. Something tells me Hunter, who is, again, a wild game hunter and chef, isn’t too put off by these videos.

Neither are the patrons, apparently, one of whom hollered out to the protesters “Best meal I’ve ever had. You guys don’t know what you’re missing,” as he left Antler. And if you’ve ever had well-prepared venison yourself, you’ll understand this customer’s enthusiasm.

“We’re a little bit busier than normal right now,” Hunter told Rogan. “At this point, it’s like dinner and a show. People want to see it. People are requesting the window table.”