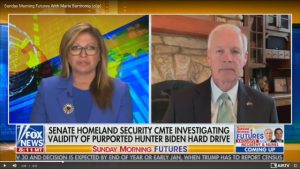 A top GOP senator has acknowledged there’s a possibility that the Federal Bureau of Investigation has looked into whether or not child pornography was found on a laptop and hard drive that is alleged to belong to Democratic presidential nominee Joe Biden’s son, Hunter.

Maria Bartiromo, a host for Fox News, recently asked Sen. Ron Johnson, who is the chairman of the Senate Homeland Security and Governmental Affairs Committee, about a report from Business Insider that says some handwriting on a subpoena that was served in 2019 to a Delaware business that was in possession of a water-damaged MacBook Pro that they were supposed to repair but no one ever showed up to retrieve it.

The hard drive contained a number of photographs, videos, and email messages allegedly from and addressed to Hunter Biden, some of which are extremely damning for his dad.

The subpoena appeared to show the FBI agent who served it was someone named “Joshua Wilson.” There was a Joshua Wilson, according to a Star-Ledger report published last year, who was an FBI agent based in New Jersey who spent nearly five years investigating child pornography, but it remains unclear if this is the same Wilson and what exactly the bureau was investigating.

Bartiromo twice asked Johnson, a lead congressional investigator, if he knows of any connection on her Fox News program, Sunday Morning Futures.

“I think you just made the connection. Again, this is what the FBI, I think, has to come clean about,” the Wisconsin Republican said in his first reply. Johnson was alluding to his letter to FBI Director Christopher Wray about the laptop sent last week.

Johnson was pressed a second time and stated he couldn’t comment any further on the matter.

“I don’t want to speculate, other than to say that — what I said publicly before. Our report uncovered so many troubling connections, so many things that need to be investigated, that I really think we’re just scratching the surface,” the senator said. “And, yes, I have heard all kinds of things that I think will probably be revealed over the next few days.”

And we already thought the stuff that demonstrates Joe Biden had connections to Burisma Holdings before he strong armed their government into firing that prosecutor was bad. If he had child pornography on there too, not only will he spend the rest of his life in prison — hopefully — but things will go down the crapper for dear old “pop” pretty quickly too.

This stuff just gets worse and worse.