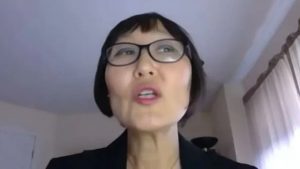 Sen. Pat Toomey, who is the ranking member of the GOP serving on the Banking Committee, has issued a request for President Joe Biden’s pick for comptroller of the currency, Saule Omarova, to give them a copy of her thesis written during her time at Moscow State University, which is titled: Karl Marx’s Economic Analysis and the Theory of Revolution in The Capital.

It seems that Omarova is steeped in Marxist thought and ideology. She was born in Soviet-controlled Kazakhstan and attended college thanks to the Lenin Personal Academic Scholarship. Omarova then graduated back in 1999 just before the fall of the USSR and is currently a law professor teaching at Cornell University.

Her nomination to this position has caused quite a bit of controversy, especially due to musings such as ending banking “as we know it.”

Toomey, who will lead the GOP charge against Omarova’s nomination, sent her a letter on Wednesday that seeks more information about her thesis. He asserted she deleted references to it on the current iteration of her curriculum vitae, although argued the paper was included in her CV as recently as 2017.

“Given that your thesis was written while you were a student at Moscow State University in the late 1980s, I assume that it was written in Russian and will require translation,” the Pennsylvania lawmaker stated, going on to add that committee staff had already inquired about the thesis. “Unfortunately, we have not received any assurances that the Committee would receive a copy of the paper in a timely fashion.”

Omarova’s nomination has courted controversy given a recent paper she authored titled, “The People’s Ledger: How to Democratize Money and Finance the Economy.” In it, Omarova offers a blueprint for “radically reshaping the basic architecture and dynamics of modern finance.”

She advocates handing the Federal Reserve near-total control of the U.S. financial system and suggests the Fed’s balance sheet should be reimagined to operate as “the ultimate public platform for both modulating and allocating the flow of sovereign credit and money in the national economy.”

Many of the tweets she has posted up in the past have led to her receiving major criticism.

“Until I came to the US, I couldn’t imagine that things like gender pay gap still existed in today’s world. Say what you will about old USSR, there was no gender pay gap there. Market doesn’t always ‘know best,’” the professor wrote during the height of the COVID-19 pandemic.