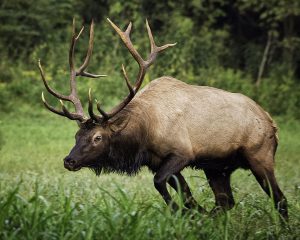 In his excellent book Death by Suburb, David Goetz tells about the theory of a biologist who majors on the study of deer and elk that created a lot of debate among other biologists by setting forth the theory of the “shirker bull.”

Among elk and deer there’s a fall ritual called the “rut” in which the bulls square off against each other, butting heads and seeking dominance over other bulls, and favor with the females, in order to fulfill their biological duty and make sure there is a future generation. According to the biologists, a “shirker bull” is typically a loner who avoids fighting with other males and thus pours all his caloric energy into growing bigger in size, while growing exceptionally large antlers.

Then David Goetz makes application of this practice by saying: “Shirkers are religious folks who unintentionally disengage from the suffering of the world and who unsuspectingly collect to themselves every available religious experience.”

When I read this I was personally convicted and pastorally convinced that this is a major problem with most of us Christians. We have redefined “Christ-likeness” as being only inner essence of character and thus we spend all of our lives trying to be more Christ-like. For our personal growth, we go to church to get more truth instead of being the church and as we are daily going, impregnating others with the truth we already have for spiritual reproduction and kingdom extension. We isolate ourselves from the culture and wonder why there is no Christian impact on our present cultural morass. We identify the dedicated believer as the one most pervasively involved in Bible study and most faithful in church attendance. Far too many Christians are shirkers who travel far and wide to take in the latest conference on how soon they can fly away from this old world. Then the most recent books on how to be a better Christian, is always must reading. What spare time is left finds them watching Christian television, or listening to sermons and teachings on self-improvement. For the most part, this only makes bigger shirkers who grow fatter in the faith without growing up and going out in the faith. This lifestyle appears to grow the beautiful antlers of personal holiness, which we think Jesus admires, all the while future generation multiplication is forfeited in our “meism” misapplication of every Christians assignment.

A number of years ago, these words of Attorney John Whitehead, spoken in a prophetic warning, have now become a present day reality: “If Christians — by personal apathy or external pressures — allow the truth to be muffled, our nation will continue to flounder in a destructive whirlpool of relative values and conflicting laws. Christians will be largely responsible for a culture that breeds crime and immorality, cheapens the value of families, and unashamedly destroys “inferior” human life.”

Dennis Peacocke illustrates the “shirkers” mindset and it’s fruit: “At the end of World War II, General Douglas MacArthur, was the protectorate administrator of Japan. Seeing a great spiritual vacuum, he called for 15,000 Christians to come to Japan and serve the Japanese leaders and people as they yearned to learn of the ways and culture of the God who had “proven Himself greater than theirs.” We could muster less than 55! What would current history have looked like if we had sent those 15,000 and more trained Christians ready, willing and able to “make disciples” of the nation of Japan, “teaching them to observe all things whatsoever” that Christ has “commanded.” Why weren’t they ready and anxious to extend Christ’s love and life-style to hungry and needy people? I’ll tell you why: because the bulk of American Evangelicals were looking for the anti-Christ, Christian defeat and a quickie, rescue-rapture ticket out of this mess. We’re the only team I’ve ever played on that preaches a victorious Christ and roots for the opposition (the anti-Christ) to win so that we can get off the field!  After all, “The quicker they fry, the quicker we fly!”

“How can we be so selfish, defeatist and stupid? Why do we insist on preparing for defeat? Why do we continue to let the secular forces always  rush back in to fill the void left by the historically consistent implosion of humanistic, cultural cardiac-arrest? Only eternity will reveal how human beings and nations have needlessly and generationally suffered due to our false reading of the times.”

“You may protest: ‘thousands of missionaries have selflessly given themselves to the nations, leading many to Christ’.  Praise God for them, but the problem is that many were prepared for the next life, but too few for this one.  The proof; the nations have not substantially changed their laws, education systems, or economic policies.  Ignite here in America an estimated 40 million Evangelicals gather in churches as their nation goes spiritually berserk.  Where are the teams of Christian lawyers, educators, scientists, business professionals and city managers, anxiously preparing for their next international assignment as God pulls down the systems of this world?  They’re tuned into the wrong channel.”

Instead of being like the ready-to-risk-all bull elks for the reproduction and multiplication of future generations, we turn inward and either spend all of our time trying to get our personal issues resolved or spend it worrying and working on getting and keeping more things. We fret and fume over what might happen to our stuff, our reputation, our standing, our personal safety, our children, our ideology, and our investments. In doing this we forget that we have all these things so we can live fully for Christ.  All the things we value were never meant to be safeguarded. We, and our Spirit-indwelt lives, with our learned spiritual truths and material things, were meant to be put at risk and invested for the glory of God by being and building disciples who will reproduce and multiply, extending the kingdom of God into every location and vocation on the earth!

Is your Christian life more like that of the shirker bull that looks groomed and great, or the old warrior bull that’s often weary and wounded, with antlers broken, but willing to fight to the death for the privilege of seeing offspring that will make a difference for generations to come?