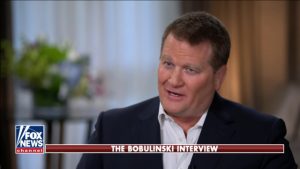 Tony Bobulinski, the former business partner of Hunter Biden recently stated that it was “disgusting” that people are saying his claims about the Biden family are a part of some sort of “Russian disinformation” plot.

Bobulinski sat down with Tucker Carlson on Tuesday evening where the former Navy veteran fired back at comments that have been made by former Vice President Joe Biden himself and Rep. Adam Schiff.

“I held a top-secret clearance from the [National Security Agency] and the [Department of Energy]. I served this country for four years in one of the most elite environments in the world, the naval nuclear power training command. And to have a congressman out there speaking about Russian disinformation, or Joe Biden at a public debate referencing Russian disinformation when he knows he sat face to face with me, that I was traveled around the world with his son and his brother, to say that and associate that with my name is absolutely disgusting to me,” Bobulinski said, adding, “This isn’t a political focus of mine. People were accusing my family of treason after I served this country.”

Bobulinksi said Schiff’s allegations of Russian disinformation were “disgusting” and prompted him to call Biden family associate Rob Walker (also another ex-Hunter Biden business partner) to deliver an ultimatum that the California Democrat’s claim needed to be retracted.

“I saw Adam Schiff go on record talking about Russian disinformation after this email had been posted online by the New York Post … And so I called [Biden family business associate] Rob Walker and I told him that if that statement isn’t retracted by Congressman Schiff, by midnight on Sunday, that I was going on record and I was disclosing all the facts to the American government, to the American citizen, and the world,” Bobulinski said on Tuesday. “I was hoping the Bidens would do the right thing, or Schiff would retract his statement, but I could not allow another minute, another hour, or a day from my family’s name to be associated or muddied up around Russian disinformation.”

During the second and final presidential debate that was held last week, former Vice President Joe Biden said, “There are 50 former national intelligence folks who said that what he’s accusing me of is a Russian plan. They have said this is, has all the — four, five former heads of the CIA, both parties say what he’s saying is a bunch of garbage.”

Well, John Ratcliffe, Director of National Intelligence would beg to differ, Joe “Big Guy” Biden. In fact, Ratcliffe said, “Let me be clear: The intelligence community doesn’t believe that because there is no intelligence that supports that, and we have shared no intelligence with Chairman Schiff or any other member of Congress that Hunter Biden’s laptop is part of some Russian disinformation campaign. It is simply not true.”

“So even as I sit here today, I would ask the Biden family to come on record and stop using my name or associating it with Russian disinformation,” Bobulinksi said during the interview.

This is pure deflection on the part of Biden and other Democrats. They are scared stiff by all of the information that’s coming out right now. All they can do is try to spin it as some sort of Russian thing as a means of distracting folks from hearing the truth.