Tommy Robinson and the Arrest Heard ‘Round the World 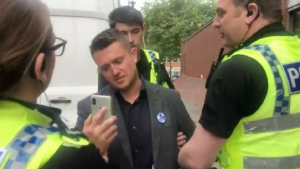 Great Britain has been on the radar of champions of free speech and enemies of political correctness around the world for some time now, as their increasingly draconian politically policies are landing citizens with heavy fines and even jail time for everything from tasteless jokes on social media to simply reporting on inconvenient facts.

Tommy Robinson is a victim of the latter, and his recent arrest has caught quite a bit of attention on this side of the pond.

Robinson, whose real name is Steven Lennon, was arrested for reasons that remain largely unclear and frankly, baffling.

The independent journalist, who has gained both notoriety and infamy for his reporting on the many issues in the UK that have accompanied increased Muslim migration, was covering the high-profile case of a Muslim gang accused of child rape.

“Robinson, the former head of the English Defense League and a longtime activist against Islam and Islamic migration,” Fox News reports, “was arrested after he was filming men accused of being part of a gang that groomed children. Britain has been rocked by a series of child sex scandals perpetuated by gangs of predominantly Muslim men.”

His vaguely defined offense was simply called “breaching the peace.” What, exactly, Robinson to breach said peace seems to be something no one is able to specify, but we do know this: it’s landed him with a 13-month prison sentence.

While Robinson’s lawyer warns it is likely he will be severely injured or killed in prison due to his well-known anti-Muslim views, righteously angry Brits are taking to the streets to protest the Orwellian arrest.

U.K. Independence Party leader and European MP Gerard Batten later tweeted: “I am trying to recall a legal case where someone was convicted of a ‘crime’ which cannot be reported on. Where he can be cast into prison without it being possible to report his name, offense, or place of imprisonment for fear of contempt of court. Can anyone remember such a case?”