Titans Player Has a Message For Football Fans: BYE! 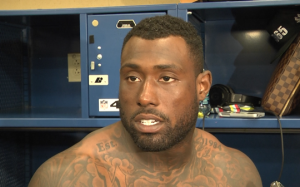 The NFL’s Tennessee Titans tight-end Delanie Walker used one key word in his response for NFL fans who want to boycott the league, upset with the national anthem protests conducted by NFL players: “Bye.”

According to The Tennessean, Walker stated:

First off, I’m going to say this: We’re not disrespecting the military, the men and women that serve in the Army. That’s not what it’s all about. If you look at most of the guys in here – I’ve been in the USO. I support the troops. This is not about that. It’s about equal rights, and that’s all everyone is trying to show, is that we all care about each other. And the fans that don’t want to come to the game? I mean, OK. Bye. I mean, if you feel that’s something, we’re disrespecting you, don’t come to the game. You don’t have to. No one’s telling you to come to the game. It’s your freedom of choice to do that. 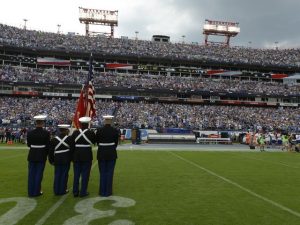 The color guard with both benches empty at Sunday’s game

The Titans were among three NFL teams, along with the Steelers, that skipped the anthem in response to President Donald Trump’s remarks about players who kneel to protest social inequality and police brutality.

Walker says that he and his family have received death threats since the team remained in the locker room during last Sunday’s anthem. 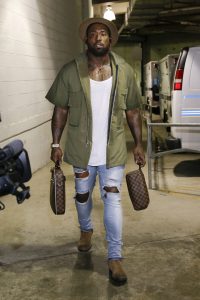 Delanie Walker looking “oppressed” with his thousands of dollars worth of Louis Vuitton bags.

I would remind Walker and the rest of the NFL that what they are doing in these so called protests are actually in violation of the 1st Amemdment and seditious in nature. Their cries of social injustice have been statistically proven to be a false narrative. What their protest is really about, if we are being honest, is the duly elected President of the United States.

If there is ANY social injustice in our country, it is the fact that these leftists persecute anyone who doesn’t agree with them, yet they are allowed to act in a seditious manner and openly subvert the will of the American people with impunity. Where are the protests for THAT?!

What these athletes are REALLY doing is being used as political pawns in a subversive game in which the leftists in America are attempting to oust the President for no legitimate reason.

So yes Mr Walker, I think we WILL be saying “GOODBYE!”