Titan’s Matthews on Anthem Rule: I will be done playing football 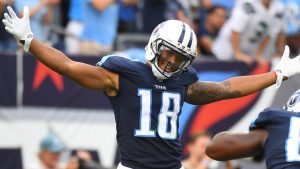 Tennessee Titans receiver Rishard Matthews threatened to quit if the NFL if team owners make players stand for the national anthem. I’m not sure anyone will miss him though.

Liberals have become fond of saying they will leave America if conservatives are elected to high offices. Unfortunately none of them ever do. I’m quite certain Matthews’ threat is equally empty.

Titans receiver Rishard Matthews threatened to quit if the NFL makes it mandatory to stand for the national anthem. Owners are expected to discuss the issue next week.

Matthews answered a tweet that asked: “If NFL makes new rule on anthem will you still stay in locker room and face the fine/penalty?” He tweeted, “No I will be done playing football.”

Matthews since has deleted the tweet, but Paul Kuharsky of paulkuharsky.com posted a screen shot.

A wide receiver who catches less than three passes a game and scores a TD once every four games does not sound like a serious threat to anyone but to the player himself. Do you really believe that anyone is losing sleep over his threat to quit? If this country would give me the opportunity to make millions as a mediocre receiver, I’d kiss the flag before every game and if you don’t believe me have some NFL owner call my bluff.