Tired of Winning Yet? Five “Most Wanted” ISIS Leaders Captured…Using a Smartphone App 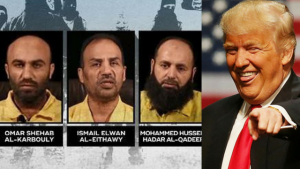 You wouldn’t know it from the mainstream media outlet or the tweets of washed up Democrat politicians, but President Trump has had an extraordinary week.

He started off by pulling out of the absolutely awful Iran deal that President Obama made, delightfully obliterating POTUS 44’s one “great” foreign policy legacy. Although Dems tore their hair out that all their hard work to basically pay Iran to pretend they wouldn’t develop nukes anymore was for naught, most Americans breathed a sigh of relief.

Then, amid new, historic peace talks with North Korea, Trump warmly welcomed back to the US three Americans released from North Korean prison camps as a result of Secretary of State Mike Pompeo’s negotiations in the isolated communist dictatorship last week.

He celebrated these wins in a rip-roaring rally in Indiana last night, where he debuted his very fitting 2020 campaign slogan: “Keep America Great!”

A small bit of news that might have slipped under the radar with all this “winning” (not to mention the media’s relentless focus on both Stormy Daniels and the Mueller investigation) is a small but significant victory against ISIS.

Noting that the tweet had come “out of the blue,” Zero Hedge reports that “Hours before, a security advisor to Iraq’s government said that Iraqi agents had detained a top aide to ISIS leader Abu Bakr al-Baghdadi, then used an app on his smartphone to lure four commanders from the terrorist organization into a trap – convincing the four Iraqis and one Syrian to cross the border from Syria to Iraq where they were captured by officials.”

Iraqi agents used the Telegram messaging app on Eithawi’s mobile phone to lure other Islamic State commanders to cross the border from Syria into Iraq, where they were captured. Those held include Saddam Jamal, a Syrian who served as the group’s governor of Syria’s eastern Euphrates region.

Hashimi described Eithawi and Jamal as the two most senior Islamic State figures ever to be captured alive. The capture of all five was announced on Iraqi state TV on Wednesday.

Hashimi said the operation was carried out in cooperation with U.S. forces, part of an American-led coalition fighting against Islamic State on both sides of the Iraqi-Syrian border.

Love him or hate him, or somewhere in between, you have to admit that President Trump has remained impressively committed to his campaign promises, one of which was to take down ISIS in the Middle East. And it’s definitely pretty cool how this operation was carried out.

Gotta love technology, and you gotta love a President who gets things done!