Is it time for a “Ronald Reagan” moment? 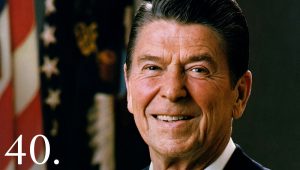 What does it mean to be a “Conservative”?

I ponder that question daily. Is it a lifestyle? Is it a mentality?

2 a :disposition in politics to preserve what is established
b :a political philosophy based on tradition and social stability, stressing established institutions, and preferring gradual development to abrupt change; specifically :such a philosophy calling for lower taxes, limited government regulation of business and investing, a strong national defense, and individual financial responsibility for personal needs (such as retirement income or health-care coverage)
3 :the tendency to prefer an existing or traditional situation to change religious conservatism cultural conservatism

I want to talk about the second definition of conservatism and in particular b.

Such a philosophy calling for LOWER TAXES, LIMITED GOVERNMENT regulation of business and investing, a strong NATIONAL DEFENSE, and INDIVIDUAL financial responsibility for personal needs.

Donald Trump is our 45th president of this great country. He ran on a platform of repealing and replacing ObamaCare (which is a train wreck), ending illegal immigration and tax reform. I have watched for the past 9 months as Republicans in the Senate mostly, but also the House of Representatives, have fought Trump on every issue he promised you and I he was going to fix. I’ve watched a Senate that has seen 373 bills from the House and have only passed 100 of them. I’ve watched the middle east slide into perpetual war and devastation and yet where are the “Conservatives” in our government.

Conservatism to me is having one foot on The Holy Bible and one foot on The Constitution. How can you be a “Conservative” if you don’t have a moral compass or the knowledge of history of this great country?

We’ve watched as the Democrat party has tried to erase history. I take you back to Charlottesville, Virginia. Violence erupted over a statue of Robert E. Lee, Famous General of the Civil War, who fought for the South. Now Lee himself didn’t believe in slavery, yet he fought for the South because he felt he needed to support his heritage. Antifa and BLM have emerged onto the scene of American politics fueled by the Democrat party’s want to remove history from our heritage. Why would a political party want to get rid of history?

So where are the “Conservatives” in the Republican party? The country is crying out for Less Government, Lower Taxes and Individual Responsibility, but yet we watch the Republican party move further and further to the left. To the very policies that you and I despise. The mainstream media fills the airwaves with propaganda and calls us “conservatives” racists, misogynistic, and homophobic.

Are we once again at a Ronald Reagan moment?

Has the Republican party left the conservative voter?

We are at a crossroads in this country. Do we continue to let the Republican party lead us down a path of devastation and destruction or do we start paying attention, pick up our guns and bibles and demand that our government start doing the things that we vote our politicians into office to accomplish?

Elections matter and 2018 is right around the corner.