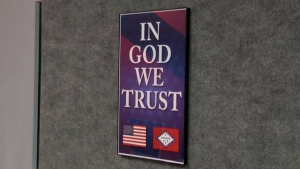 There is a stunning correlation between the time our nation decided to kick God out of the schools and the time school shootings, teen pregnancy, juvenile delinquency, and an overall breakdown of mortality increased.

As we kicked the Lord out of schools, humanism, atheism, and secularism took its place, and the moral fabric of these ideologies simply doesn’t compare to the unique morality contained in the pages of scripture on which our great nation was founded.

It is a common misconception that “separation of church and state” is guaranteed by the Constitution, you won’t find those words anywhere in our founding documents. The phrase was actually found in a letter written by Thomas Jefferson to a church, and ironically enough, he actually used it to explain the purpose of the Establishment Clause of the First Amendment which guarantees “Congress shall make no law respecting an establishment of religion, or prohibiting the free exercise thereof…”

The First Amendment is not meant to keep religion out of the state, but to keep the state out of religion.

This is why, for so many years, it was common to find the 10 Commandments in schools or courthouses and “In God We Trust” on public buildings. Our nation was founded by theists, who believed in a Creator God that endowed us with natural rights that the state could not infringe. It is from this God that our rights are derived, and it is this same God that we turned our backs on when we kicked Him out of schools.

So it makes sense that many states across the nation are repenting of this decision, and are beginning to put God back in the schools. Obama might have tried to claim this was “no longer a Christian nation”, but it turns out he might have been wrong after all.

The American Mirror reports that several lawmakers are now moving to require the national motto “In God We Trust” to be displayed in schools.

“Tennessee lawmakers approved a measure last month to require ‘In God We Trust’ to be posted on school property for students to view each day, and the bill now awaits a signature from Gov. Bill Haslam. In Arkansas, school officials are working to comply with Act 911, a new state law that requires schools to display In God We Trust posters, as well as the U.S. and Arkansas flags, if those items are donated,” they write.

“Florida mandated In God We Trust on display, as well, though it’s already on the state flag as the official motto,” they add. “Legislators in South Carolina, Wyoming, Arizona, Alabama, Oklahoma and other states are considering similar requirements, over the objections of atheist groups that equate the motto to state-sponsored religion.”

South Carolina state Rep. Mike Burns explains that while students once “knew what was right versus wrong,” and that the prominence of God in our nation had a “stabilizing effect in society,” the changes when God was taken out of schools is undeniable.

“When we took all that out, look where we’ve evolved to,” he told the Lumen Student News. “Instead of having God in schools, now we have to have bullet-proof glass and we’ve got to have metal detectors. It’s sad that we’ve evolved to this negative place that we are, and now we’ve got to try to fight our way out of it.”

Florida Democrat (you read that right) Kimberly Daniels says that her decision to back her state’s legislation has nothing to do with politics.

“God isn’t a Republican, and He’s not a Democrat … He is the light, and our schools need light in them like never before,” she said.

Can I get an amen?