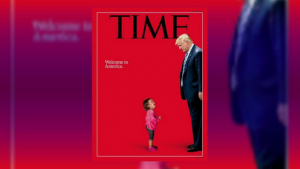 So far, there have been at least three prominent, viral photos used by the left to illustrate the horrors of the “crisis at the border” in which immigrant children are supposedly being ripped callously from their mother’s arms before being sent off to the Nazi death camp by Herr Trump…that all turned out to be false.

The first was an image of “children in cages” that turned out to be from 2014, when Obama, not Trump, was President. Oops.

The second was of a toddler in a “cage” who turned out to have been placed in the cage as part of a protest…against putting children in cages. Right.

Finally, on the very day that a 2-year-old Honduran girl graced the cover of Time Magazine being stared down by a heartless Trump, an interview with the girl’s father made the rounds, explaining that she was not, in fact, separated from her mother and that the mother abandoned her other three children and gainfully employed husband to cross the border illegally for the second time and falsely claim political asylum.

Despite all the egg on their face, The Daily Wire’s Ben Shapiro reports, Time Magazine actually doubled-down on their choice to use little Yanela’s image, which was taken as her mother was searched after being detained by border patrol literally right next to her.

The June 12 photograph of the 2-year-old Honduran girl became the most visible symbol of the ongoing immigration debate in America for a reason: Under the policy enforced by the administration, prior to its reversal this week, those who crossed the border illegally were criminally prosecuted, which in turn resulted in the separation of children and parents. Our cover and our reporting capture the stakes of this moment.

“Well, actually, the cover is a lie,” he retorts. “And instead of recognizing that, TIME doubled down on the lie. It was, to repeat a phrase used by Dan Rather’s defenders to describe his fictitious evidence of George W. Bush going AWOL as a member of the National Guard, ‘fake but accurate.’ No wonder so many people resonate to President Trump’s cries of fake news.”